Have you lost your Wethersfield High School class ring? Have you found someone's class ring? Visit our Eagles lost class ring page to search for your class ring or post information about a found ring.

David Dubois
Class of 1966
Navy, 20+ Years
CDR David Dubois was a Surface Warfare Officer during the first half of his career and then became a TAR commanding officer in the Active Duty Reserve program.
Report a Problem

jay dahlberg
Class of 1978
Army, 17 Years
u.s. army from july 78 to july 95. served around the world with campaigns in panama, the gulf war and somalia.
Report a Problem

Victor Morin (Miano)
Class of 1969
Navy, 12 Years
LCDR Morin served on active duty at Headquarters Naval Security Group Command in Washington DC 1981 to 1983. In 1984 and 1985 he was assigned to The White House and part of the President's Crisis Management Team. LCDR Morin then served as a Naval Security Group Reserve officer in Seattle from 1985 to 1993.
Report a Problem

Willard Rietzel
Class of 1960
Navy, 6 Years
Served as Communications Officer with the last three years on Commander Destroyer Squadron One Staff out of San Diego that included two tours to Gulf of Tonkin doing search and rescue for which I received the Navy Achievement Medal with combat V, the unit receiving the Navy Unit Citation and one of our helicopter detatchment pilots receiving the Medal of Honor. That 4+ hour night time rescue showed how teamwork and luck sometimes goes hand in hand.
Report a Problem 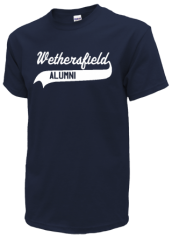 Read and submit stories about our classmates from Wethersfield High School, post achievements and news about our alumni, and post photos of our fellow Eagles.