Have you lost your West Valley High School class ring? Have you found someone's class ring? Visit our Wolfpack lost class ring page to search for your class ring or post information about a found ring.

I'm doing this Memory for my brother. He was a wonderful brother who was very loving, kind, and always willing to help someone who needed it. Dale was murdered by two teenagers. Dale was killed on the job (king cab driver).

My brother Danny was a great brother. Most of you would remember him as the class clown! After high school he joined the Navy. When he passed he was training to become a Pharmacist. He had great things going for him. He was tragically taken from us in a motorcycle accident. He is missed dearly!

I came into this world with Jeff on June 11, 1961 and shared many birthdays with him. I will miss him dearly. Below is Jeff's obituary. Jeffrey Schloesser, 49, went to the Lord Thursday, March 24, 2011, at Fairbanks Memorial Hospital with his family by his side.
Jeff was born in Fairbanks on June 11, 1961, with his twin sister, Jackie Siddall, to Duane and Marie Schloesser. He was raised on his parents' farm in Fairbanks with his brothers and sisters helping with the numerous chores of selling fresh eggs to the local grocery store as well as growing hay.
Jeff was a genius beyond measure and had a sense of humor that enlightened many lives. He was an avid outdoorsman with a passion for fishing. He also had a love of music, movies, walking and reading. He was a man of few words.
Jeff became a member of the Operators & Engineers Union after high school, and later faced many challenges for the duration of his life until complications of pneumonia overtook him. Jeff possessed many talents and gifts, particularly courage when he chose to help a friend in need and ended up saving his life.
Our deepest condolences to his extended family at Paul William's house who touched his heart and soul in many ways.
Jeff is preceded in death by his mother, Marie Schloesser (Douglas); and his brother Fredrick Schloesser.
Jeff is survived by his father, Duane Schloesser; and his siblings, Clyde Stokes of Little Rock, Ark., Josie and Michael Lindsey, Tim and Jody Schloesser, Theresa and Don Ohler, Jackie and Bob Siddall of Madison, Wis., Geri Schloesser, Joseph Schloesser and Sara Hutton. He also is survived by numerous nieces, nephews, cousins, aunts and uncles.
Viewing is at 1 p.m. Wednesday, March 30 at the Immaculate Conception Church, 115 North Cushman Street, Fairbanks, with services starting at 2 p.m. and a potluck following the service. Jeff's final resting place will be at Birch Hill Cemetery at a later date.
In lieu of flowers, the family requests condolences or donations be sent to Duane Schloesser at 925 Schloesser Drive, Fairbanks, AK 99709.
Arrangement were entrusted to Fairbanks Funeral Home.

Lyndsay Thomas was born and raised in Fairbanks. She was a talented musician who attended the UAF Summer Fine Arts Camp from ages 11–17. She graduated from West Valley High School in 1997, studied vocal music performance at UAF for a year and was driving to New York to study with her longtime coach when her life was cut tragically short in an auto accident in October 1998. Her family established this scholarship in her memory for students attending the Summer Fine Arts Camp or its successors at UAF. This fund has since doubled in size with the addition of contributions from sales of a safety video developed by the trucking company involved in the accident that took Lyndsay’s life.

Born Jan. 8, 1962, in Philadelphia, Nicole Bonney died unexpectedly Dec. 1, 2015, while visiting Tucson, Arizona. Raised in southeastern Pennsylvania until she moved to Fairbanks in 1970, Nicole called Alaska her home.
A 1979 graduate of West Valley High School, Nicole earned her registered nurse degree from the University of Alaska and specialized in diabetes care within the Native community. She resided in Chugiak where she greatly enjoyed the Alaska outdoors.
Everyone who knew Nicole knew her sense of humor and unmistakable laugh; what many people didn't know was her impressive natural talent as an illustrator.
She is survived by her daughters, Cassandra Case and Gabrielle Dahl, of Fairbanks; grandchildren Bradley and Gianna Case, of Fairbanks; husband Tom Gregori of Chugiak, mother Ursula Netscher, of Fairbanks; father William Bonney, of Moscow, Idaho; and brother Jordan Bonney, of Minneapolis.
A celebration of life will be held at 2 p.m. June 19, 2016, on Sternwheeler Tanana Chief in Fairbanks. Food and drinks will be provided. All are welcome to attend.
Published in Daily News-Miner on May 22, 2016

Native arts teacher. God bless this man and his patience with me and many many others.

If it was not for his mentoring, who knows where and what I would be doing now. 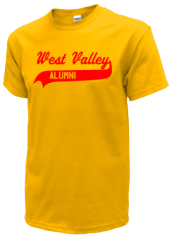 Read and submit stories about our classmates from West Valley High School, post achievements and news about our alumni, and post photos of our fellow Wolfpack.