Have you lost your Theodore Roosevelt High School class ring? Have you found someone's class ring? Visit our Roughriders lost class ring page to search for your class ring or post information about a found ring.

Awilca Rosario
Class of 1975
Air Force, 20+ Years
Entered the AF in 1980 travel all over the United States, am a veteran of Desert Storm, Enduring Freedom, Iraqi Freedom have met many diversified people in my career. Presently have over 20 years of service and am hoping to retire soon.
Report a Problem

Dion Edwards
Class of 1989
Army, 15 Years
Started as an enlisted member in 1991, Chemical Operations Specialist. Became a Chemical Officer in 2001. I am currently a Comapny Commander at Fort Hood, TX.
Report a Problem

felix torres
Class of 1971
Army, 20+ Years
Participated in tow gulf wars, The lkiberation of Kuwait and Enduring Freedom in Afghanmistan.
Report a Problem

Nelson Ocasio
Class of 1981
Marine Corps, 20+ Years
Entered as a Combat Engineer and was taught about basic demolitions and contruction. Learned how to shoot very well and became the 1991 NRA National Service Rifle Champion. Was featured in an article in one of the newspapers in New York.
Report a Problem 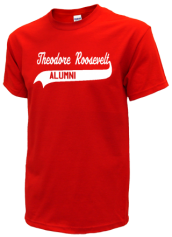 Read and submit stories about our classmates from Theodore Roosevelt High School, post achievements and news about our alumni, and post photos of our fellow Roughriders.

Post Your News
In Memory Of
Our Theodore Roosevelt High School military alumni are some of the most outstanding people we know and this page recognizes them and everything they have done! Not everyone gets to come home for the holidays and we want our Theodore Roosevelt High School Military to know that they are loved and appreciated. All of us in Bronx are proud of our military alumni and want to thank them for risking their lives to protect our country!