Have you lost your St Clairsville High School class ring? Have you found someone's class ring? Visit our Red Devils lost class ring page to search for your class ring or post information about a found ring.

Chad C. Campbell, 44, of St. Clairsville, Ohio died May 30, 2017 in Washington Hospital, Washington, PA after suffering a heart attack. He was born May 1, 1973 in Bellaire, Ohio son of Thomas W. and Ruth E. Trigg Campbell. Chad was a 1991 graduate of St. Clairsville High School. He was a member of the Laborer’s Union #1149 and was working as a straw boss for pipeline construction. He was a member of the St. Clairsville Moose Lodge #2504 and was an avid tournament dart and pool player. Surviving are his parents, Ruth and Tom Campbell; his three children, Eliana, Lily and Adin; two sisters, Cara (Jeff) Dragan and Heather Adams; a nephew, T.J. Adams; four nieces, Taylor Clark, Brooke Adams, Sara and Katie Dragan; his companion, Stacy Dietrich; and many friends. Family and friends will be received at Toothman Funeral Home in St. Clairsville on Friday from 2 to 8 p.m. and again on Saturday from 10 a.m. until time of services at 11 a.m. with Rev. Kenneth Gifford officiating. Burial will follow in Powhatan Cemetery, Powhatan Point, Ohio

He was born in Steubenville, Ohio on September 15, 1965, a son of the Donald Cooper and Sandra Brown Cooper.

Daniel was an employed by Lake Research, Washington D.C. and worked in the New York City office.

He was preceded in death by his grandparents Frank and Helen Brown, and Donald Cooper Sr; Aunt and Uncle, Sharon and Tom Brown.

Memorial contributions can be made to the St. Clairsville High School Alumni Association.

Passed away unexpectedly December 12, 2010. He is buried in Montevallo at the Alabama National Cemetary.

John passed away in Las Vegas Nevada He was single no children. John was a crane operator for a sign company A Veteran of both Army &Navy he will be missed by Family & friends He was my very best friend my brother Our Lord is awaiting you with open arms.your friend your brother John Marr His memorial was on June 19th 2015 at St.Clairsville union cemetery

Norma Jean Gatti passed away on November
22, 2011. She taught 30 years in Ohio, retiring around Christmas 1998, at River Local High School in Hannibal Ohio. We moved to Florida in January 1999 to be with her mother Brownie. Jeanie passed from a called decease Pulmonary Fibrosis.

Wilfrid James Gallagher passed away on March 27, 2011 at Wheeling Hospital from congested heart failure and cardiac arrhythmia. Will was the son of Rose Aldretta McCort Gallagher Mengon and the late Wilfrid James Gallagher Sr. Will was a Technology Field Developer for OMERESA, Jefferson County Educational Service Center. He was a member of the East Richland Evangelical Friends Church, the Masonic Lodge 89 of Barnesville, Ohio, and a founding member of the Belmont County Chapter 16 Masonic Motorcycle Club. He was preceeded in death by his father, Wilfrid James Gallagher Sr. in December, 1955. Surviving, in addition to his mother Aldretta, are his wife of 34 years, Karen Sue Sturgill Gallagher, sons: James Robert (Crystal) Gallagher of Lafferty, Ohio, Thomas William Gallagher of Barnesville, Ohio, two grandchildren: Christopher James and Khloe Renae Gallagher, brothers: Art (Jeanette) Mengon, of Bartonville, Texas, Lewis (Carman ) Mengon of Lloydsville, Ohio, and Mark (Julie) Mengon of Wadsworth, Ohio.

Will was proud of the home he designed and built for his family in 1998. Will is loved and missed very much by his wife, Karen, sons, Jimmy and Tommy, grandchildren, Christopher and Khloe, mother, brothers, neice, nephews, and aunts and uncles. 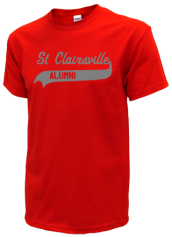 Read and submit stories about our classmates from St Clairsville High School, post achievements and news about our alumni, and post photos of our fellow Red Devils.