Have you lost your Spoon River Valley High School class ring? Have you found someone's class ring? Visit our Vikings lost class ring page to search for your class ring or post information about a found ring.

Aaron S. Barnes
Class of 2003
Army, 3 Years
I have been with the 101st Airborne (Air Assault) Division for 3 1/2 years. I am currently on the last leg of my second deployment in Iraq, my first one was from September 2005 to September 2006 and then got deployed again from September 2007 and expecting to be home late November 2008. My job or "MOS" is 13F (fire support specialist), my duties are to locate the enemy and call in artillery, air, and naval fire (missles, bombs, etc.) onto the enemy and make sure the job is taken care of. Since this is unconventional warfare I am currently the Platoon Sergeants driver and we go out on operations and patrols every single day just as people would go to work everyday.
Report a Problem

Adam Putman
Class of 2002
Air Force, 5 Years
I am a mechanic in the AF. No I don't work on aircraft beleive it or not there is more to the AF than just aircraft. My specialty is working on/fixing diesel engines. Right now the squadron I am with we mostly have tactical vehicles 5-tons duece and a halfs HUMMVS.I.E. the big green trucks you see in military type movies. I enjoy what I do and I beleive in what we stand for. I have been deployed to Iraq and will soon be returning. Contrary to beleif yes the AF does deploy lol. If you have any questions or comments just let me know.
Report a Problem

Brad Smith
Class of 1985
Air Force, 20+ Years
As of September 08, I've served 23 years in the USAF. Paticipated in Desert Shield/Storm, Northern Watch, Southern Watch, Iraqi Freedom, and a few others.
Report a Problem

donald(jack)daniels
Class of 1984
National Guard, 20+ Years
im with the 2/123 feild artillary ive served in iraq for 18 mon and im going to be lieving for egypt in may of 2010 i will be over there for a year
Report a Problem

Pamela Brown (Campbell)
Class of 1999
Army, 8 Years
Served 8 years as a Human Resources Specialist (42A). I processed out in 2008 because my husband is on Active Duty at Fort Bragg. I decided it was time I focused more on my family and also go back to college.
Report a Problem

Rick Abbadusky
Class of 1984
Navy, 4 Years
USN i was an aviation electronic technician got out as an E-3
Report a Problem

Rick Abbadusky
Class of 1984
Navy, 4 Years
served 4 years active on the USS Roosevelt and USS Nimitz got my shell back and blue nose
Report a Problem

Thomas Hunborg
Class of 2006
Army, 4 Years
Served in the reserves Korea and currently in The Old Guard
Report a Problem

Thomas Hunborg
Class of 2006
Army, 3 Years
Currently serving as a vehicle mechanic in the 3D US INF REG The Old Gaurd at Ft. Myer, Va.
Report a Problem 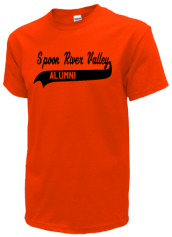 Read and submit stories about our classmates from Spoon River Valley High School, post achievements and news about our alumni, and post photos of our fellow Vikings.

View More or Post
In Memory Of
Our Spoon River Valley High School military alumni are some of the most outstanding people we know and this page recognizes them and everything they have done! Not everyone gets to come home for the holidays and we want our Spoon River Valley High School Military to know that they are loved and appreciated. All of us in London Mills are proud of our military alumni and want to thank them for risking their lives to protect our country!