Have you lost your New Rochelle High School class ring? Have you found someone's class ring? Visit our Huguenots lost class ring page to search for your class ring or post information about a found ring.

Andrei M. Sarna-Wojcicki
Class of 1955
Army, 2 Years
Served in Army Corps of Engineers, stationed at Fort Belvoir, VA, 1960-1962, during Cold War and Cuban missle crisis. Was about to be sent to Vietnam as part of Technical Intelligence Unit, but HQ changed its mind. Vetting process would have been too complicated (I had relatives living in Poland at the time).
Report a Problem

Bill Hennigar
Class of 1965
Army, 20+ Years
I spent 4 years in the USAF during Viet Naim. I was an aircraft mechanic on F-105, C-130 & KC, EC, RC- 135's. After active duty I enlisted in the Nebraska Army National Guard as a Helicopter mechanic. I went to flight school and became a Warrant Officer Helicopter Pilolt and Maintenance Officer. I retired in 2006 as a CW4 with 34 total years of service.
Report a Problem

Henry "Hank" Wohlrabe
Class of 1962
Air Force, 6 Years
Served at Warner-Robins in GA and in England
Report a Problem 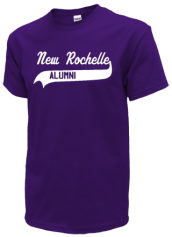 Read and submit stories about our classmates from New Rochelle High School, post achievements and news about our alumni, and post photos of our fellow Huguenots.

We've created a book of memories and life stories of our classmates, plus some New Rochelle...
Read More »