Have you lost your Hermantown High School class ring? Have you found someone's class ring? Visit our Hawks lost class ring page to search for your class ring or post information about a found ring.

Janice Hackett (Nyborg)
Class of 1975
Army, 13 Years
I served as a military intelligence analyst for 13 years. Six of those years were served overseas in beautiful Germany. I am a Gulf War era vet.
Report a Problem

Kraig Lee
Class of 1964
Air Force, 4 Years
Served in Minn, Iowa, and Southeast Asia as an Aircraft Control And Warning Technician both in ground and airborne radar (EC 121 aircraft)
Report a Problem

Matt (Klous) Foster
Class of 1970
Army, 20+ Years
Enlisted in 1971, Basic training at Ft Knox. Ended up graduating from West Point in 1977. Stationed all over the world, retired as a Lieutenant Colonel in 2012.
Report a Problem

Peggy Christianson Lawler
Class of 1969
Army, 3 Years
I served in the last class of the Womens Army Corp before it was disbanded. My field of expertise was in medicine.
Report a Problem

Rob Wittwer
Class of 1998
Marine Corps, 5 Years
Served as an aviation electrician in NC, FL, CA, Germany and Iraq during OIF. Honorable discharge as a Sergeant after 5 years 2 months.
Report a Problem

Ronald Anderson
Class of 1990
Air Force, 18 Years
Serves as a Satellite Communication maintainer. I have been stationed oversea for 8 years to Europe and Asia. I have deployed to over 50 locations for war time and humanitarian mission in Europe, Africa and the Middle East. To include Afghanistan, Pakistan, Bosnia, Italy and Ghana.
Report a Problem 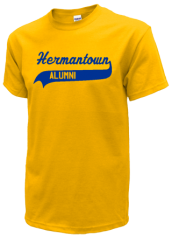 Read and submit stories about our classmates from Hermantown High School, post achievements and news about our alumni, and post photos of our fellow Hawks.

View More or Post
In Memory Of
Our Hermantown High School military alumni are some of the most outstanding people we know and this page recognizes them and everything they have done! Not everyone gets to come home for the holidays and we want our Hermantown High School Military to know that they are loved and appreciated. All of us in Hermantown are proud of our military alumni and want to thank them for risking their lives to protect our country!