Have you lost your Winchester High School class ring? Have you found someone's class ring? Visit our Sachems lost class ring page to search for your class ring or post information about a found ring.

Doug Smith
Class of 1963
Navy, 4 Years
I landed in the navy after 3 foolish years at the Univ. of Miami. Beyond boot camp and some training I was in submarines, first the USS Gato (SSN 615), and then USS Nautilus (SSN 571). Among many adventures, I was on Gato during the Scorpion search (first ship on site), 1968, and during the the "Hirsohima" incident, 1969. My last year was on the Nautilus wandering around the Atlantic, often not "underway on nuclear power".
Report a Problem

Elizabeth V. Bonnett
Class of 1996
Navy, 18 Years
I joined the Navy in May of 2001. I was in Bootcamp in Great Lakes, IL. (or if you are in the Navy we call it Great Mistakes)
My first ship was stationed in San Diego, CA. The USS John C. Stennis CVN-74. Or JCS (JUST CLEAN SOMETHING). As you can imagine I was sent right away to the shores of the Arabian Gulf. The Navy does not fail when it comes to port visits. I have been all over the world. I have been to Hong Kong, Singapore, Hawaii, Italy, Germany, Afghanistan, Australia, Kuwait, Kyrgyzstan and All over the US.

guerry eaton
Class of 1954
Army, 3 Years
Served in East Africa with the Army Security Agency.Served from 10/54-07/57
Report a Problem

Herbert J. Cleary
Class of 1948
Navy, 4 Years
USS Waldron DD-699 for most of my enlistment
Report a Problem

John A. Ellis
Class of 1965
Air Force, 4 Years
After high school I joined the USAF where I was trained for Air Police. My first duty station was Griffiss AFB, N.Y., then I was sent to Da Nang AFB, Viet Nam. From there I was stationed At Chanute AFB, Ill., where I was dischared. After that I started living in Indiana and have been here ever since
Report a Problem

John M. Griffin
Class of 1967
Army, 24 Years
I did not graduate from WHS but lived in Winchester from 60-69 near Winter Pond. I dated girls from WHS -- two from Class of '68 --Jonna and Peggy. George Brough -- originally 67 but graduated 68 -- and I were drafted in 1971. We did Basic at Ft. Dix. He became a Helo Crew Chief and served in Korea. I was a German linguist "accidentally" sent to Ft. Devens in 1973 to assist the 10th Special Forces Group on an exercise in Germany. Never intended to make the Army a career but the 10th sent me to Jump School at Ft. Benning, GA. Things "fell" into place from there (pun intended). I eventually transitioned to full Special Forces, first as an NCO later graduating from OCS in 1983. Made it thru Ranger School, Dive School, Pathfinder School, and Military Freefall along with other admin Army courses retiring as an SF Major in 1995. Sidebar of other Winchesterites -- the newly appointed Chairman of the Joint Chiefs -- GEN Mark Milley is from Winchester -- tho a graduate of Belmont Hill not WHS. We roomed together as LTs in 83-85.
Report a Problem

Ko Tangen
Class of 1976
Air Force, 1 Years
I served in basic training for longer than one month and was honorably discharged from the 3743rd BMTS at Lackland Air Force Base in San Antonio Texas USA.
Report a Problem

Robert H. Pride
Class of 1963
Navy, 20+ Years
After ROTC at Tufts was Communications Officer on USS Cone (DD-866) out of Charleston.Made Westpac cruise in '67 and '68. Then Comm officer on Destroyer Squadron 36 staff aboard the USS Davis (DD-937) for another Westpac deployment thru April '69. In October '70 assigned to ComNavForV in Saigon as an Intelligence Officer. After release from active duty in October '71 joined Navy Reserve Intelligence program in Boston. Retired from Navy Reserve on the deck of Old Ironsides in 1990.
Report a Problem
12 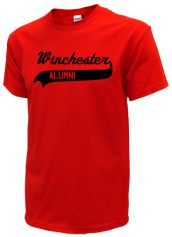 Read and submit stories about our classmates from Winchester High School, post achievements and news about our alumni, and post photos of our fellow Sachems.


View More or Post
In Memory Of
Our Winchester High School military alumni are some of the most outstanding people we know and this page recognizes them and everything they have done! Not everyone gets to come home for the holidays and we want our Winchester High School Military to know that they are loved and appreciated. All of us in Winchester are proud of our military alumni and want to thank them for risking their lives to protect our country!