Have you lost your Willamette High School class ring? Have you found someone's class ring? Visit our Wolverines lost class ring page to search for your class ring or post information about a found ring.

Alan Hein
Class of 1966
Navy, 4 Years
Served 1966 to 1970 with Carrier Air Wing 9 in Fighter Squadron VF-96 aboard the USS Enterprise for 3 tours and 1 tour with the USS America in Vietman.
Report a Problem

Bret C. Wilson
Class of 1979
Navy, 20+ Years
The most rewarding years of my life were spent in the midst of harms way. We just never thought of it as that. If you know what I mean. Work hard was rewarded by the ability to Play Hard (With the same dudes you worked with day in and day out).
Report a Problem

Tiffany Halberg (Motley)
Class of 2000
Army, 8 Years
Truck Driver, Training NCO, GSA Fleet Manager. Did 3 tours over seas. About to get out in July of 2012 to start a new career.
Report a Problem 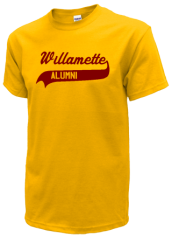 Read and submit stories about our classmates from Willamette High School, post achievements and news about our alumni, and post photos of our fellow Wolverines.

Sorry to have to say this, but due to COVID, people are not feeling comfortable gathering together. So Aug 15, 2020 is ...
Read More »

View More or Post
In Memory Of
Our Willamette High School military alumni are some of the most outstanding people we know and this page recognizes them and everything they have done! Not everyone gets to come home for the holidays and we want our Willamette High School Military to know that they are loved and appreciated. All of us in Eugene are proud of our military alumni and want to thank them for risking their lives to protect our country!