Have you lost your T L Hanna High School class ring? Have you found someone's class ring? Visit our Jackets lost class ring page to search for your class ring or post information about a found ring.

Anthony Valence
Class of 2003
Navy, 3 Years
Weatherman in the Navy
Report a Problem

Harry M. Siegel
Class of 1966
Navy, 14 Years
Enlisted and went to the Naval Academy Prep School prior to going to the U. S. Naval Academy. Served in Destroyers, Gunboats, and ran a POW Retrieval Team. Last job in the Navy was a Computer Center Manager in Washington, DC.
Report a Problem

Michelle brown
Class of 1995
Navy, 3 Years
Worked on AirCraft Carrier, wish I was still there..
Report a Problem

Oscar Means
Class of 1977
Air Force, 20+ Years
Servived 24 Years. Stationed all over the world, England, Germany, Japan, Korea and Guam just to name a few. Anderson will never be the same after seeing the world.
Report a Problem

Patrick Ward
Class of 1993
Marine Corps, 13 Years
Staff Sergeant in the Marines. I am currently an instructor in Pensacola, FL.
Report a Problem 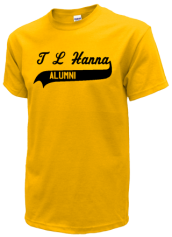 Read and submit stories about our classmates from T L Hanna High School, post achievements and news about our alumni, and post photos of our fellow Jackets.

Post Your News
In Memory Of
Our T L Hanna High School military alumni are some of the most outstanding people we know and this page recognizes them and everything they have done! Not everyone gets to come home for the holidays and we want our T L Hanna High School Military to know that they are loved and appreciated. All of us in Anderson are proud of our military alumni and want to thank them for risking their lives to protect our country!