Have you lost your Steinmetz High School class ring? Have you found someone's class ring? Visit our Streaks lost class ring page to search for your class ring or post information about a found ring.

Anthony Battaglia
Class of 1950
Army, 4 Years
In high school tony was on the basketball team. After graduation he joined the Army serving in Korea. He was awarded the purple heart after being wounded. Spent several years recuperating from more the 15 surgeries.
Report a Problem

Darren L Traylor
Class of 1986
Army, 5 Years
Definitely got my start during ROTC.
Report a Problem

George E. Kotars
Class of 1945
Coast Guard, 3 Years
In Boot Camp in summer of '45 when WWII ended abruptly.I extended my enlistment for a 3 year hitch. After training at NAS Lakehurst NJ I was promoted to Aerographer's Mate and spent the next couple of years at sea on the North Atlantic Weather Patrol. My last year was speent at Third District Headquarters in NYC.where we issued firecasts of atmospheric weather and surf conditions impacting Coast Guard operations between Maine and the Carolinass. Those three years were among the best of my
life ......adventursome, exciting and educational ... just as the recruiting poster had promised. I am proud to have served in the U.S. Coast Guard.

George Paul Duben
Class of 1936
Army, 4 Years
Was a cook and served in WWII.
Report a Problem

JOE MANCINI
Class of 1968
Coast Guard, 6 Years
BASIC TRAINING AT CAPE MAY NEW JERSERY STATIONED AT 95 TH AND CAL HARBOR AND THEN MOVED TO GLENVIEW NAVAL AIR STATION PROMOTED TO COXSIN ( TO DRIVE THE BOATS )FROM ENGINE MEN NOW LIVES IN ROLLING MEADOWS WITH WIFE LINDA AND DAUGHTER JOLI WITH TOTAL OF 7 KIDS AND 6 GRANDKIDS
Report a Problem 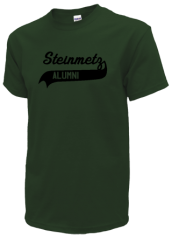 Read and submit stories about our classmates from Steinmetz High School, post achievements and news about our alumni, and post photos of our fellow Streaks.

View More or Post
In Memory Of
Our Steinmetz High School military alumni are some of the most outstanding people we know and this page recognizes them and everything they have done! Not everyone gets to come home for the holidays and we want our Steinmetz High School Military to know that they are loved and appreciated. All of us in Chicago are proud of our military alumni and want to thank them for risking their lives to protect our country!