Have you lost your Saratoga High School class ring? Have you found someone's class ring? Visit our Falcons lost class ring page to search for your class ring or post information about a found ring.

Mark D Flanagan
Class of 1966
Navy, 10 Years
Joined Navy Reserves last year in high school. After graduation went on active duty for 2 years. Went to Vietnam on DLG-20, USS Richmond K. Turner, a guided missile destroyer. Deployed there for 6 months at northern SAR off Hanoi in the Gulf of Tonkin. Got out in two years and went lto college graduating from San Diego State in 1972 with BS in Business Administration. Went on active duty again for 8 years as a Supply Corps Officer. Stationed for 2 years in Naples, Italy which is a very fond memory of mine. Attained rank of LT but did not retire and got out after 8 years. Big mistake!!! Still really have fond memories of service.
Report a Problem

Robert Brennan
Class of 1977
National Guard, 9 Years
Spent 1 1/2 years at 40th Infantry Headquarters then 4 years with 1/185th CAB Battalion and am currently assigned to the ofice of the Adjutant General and am TDY at JFTB Los Alamitos as a recruiter/drill instructor. Planning on staying in for a full 30 years
Report a Problem

Stanley Arthur Murrell
Class of 1963
Army, 20+ Years
Enlisted in 1966 and served almost thirty years retiring in 1994 as a full Colonel.
Report a Problem 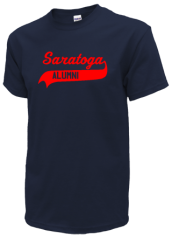 Read and submit stories about our classmates from Saratoga High School, post achievements and news about our alumni, and post photos of our fellow Falcons.

The Committee has planned a wonderful 35 year reunion for the Class of 1976. It will be held at SJ Hilton on Sat. Sept. ...
Read More »

View More or Post
In Memory Of
Our Saratoga High School military alumni are some of the most outstanding people we know and this page recognizes them and everything they have done! Not everyone gets to come home for the holidays and we want our Saratoga High School Military to know that they are loved and appreciated. All of us in Saratoga are proud of our military alumni and want to thank them for risking their lives to protect our country!