Carmen was a very brave and intellegente person who hung around school with me,Nellie Altamirano and people called us mutt and jeff. She left behind 2 sons and one daughter in law. She battle cancer and I don't think many people could have faced death with such dignity.

Died at home from pancreatic cancer. Surrounded by family. He had been ill from various problems for a few years
Memory at wwoz.org AND everloved.com

we joined the AF together,but after "boot" and other training, they sent us to different assignments and I lost track of him until I was notified of his death several years after discharge. (Cleto JImenez)

Jen passed away in 2017. We were friends in high school and college. Then, we weren't in touch for over 50 years, when I moved from Los Angeles to Israel. We were united again through Classmates and corresponded or Skyped until the end but never met in person again. I am grateful to Classmates for the opportunity to re-unite with her. She was a great person and I really miss her.

As a teenager. Marcos graduated from Stevenson Junior High in 1979, located in East Los Angeles, Ca. In fall 1979 he began attending Roosevelt High School, where he was part of the ROTC program. A daily routine for Marcos was to iron his khakis in the morning while he played oldies on the radio, sometimes he sang along to songs like â€œDuke of Earlâ€ and â€œEarth Angel.â€ However, Fridays were Marcosâ€™ favorite days, not only because it was the weekend, but because he was required to wear his ROTC uniform. He took pride in his ironed creased pants and shirt, but he also spent a lot of time in shinning his metals, and not to mention his black shiny shoes.
On weekends, he usually spent them playing football with the guys or going to the beach. His brother Rene would usually come over in his red Toyota pick-up truck and take Marcos out to the beach, fishing, or even on trips such as San Francisco.
Marcos always had a smile on his face, and knew how to make others smile. He knew how to tell stories and deliver a good joke.
His years in the ARMY National Guard and ARMY SGT Salgado joined the ARMY National Guard in January of 1995 as part-time and in 2004 he became full-time active duty in the ARMY when he received orders to serve in Afghanistan. In 2007 SGT Salgado returned to the Middle East where he served in Iraq, his job was to transport fuel from Iraq to Kuwait. While he served in Iraq, he met troops from CuscatlÃ¡n from San Salvador. SGT Salgado made an observation in regard to the quality of food the American troops were served in comparison to the type of food Salvadorian troops were served. SGT Salgado made a remarkable gesture to treat the Salvadorian troops to eat at a local restaurant. SGT Salgado served 14 years and 8 months in the ARMY National Guard/ARMY and throughout these years he was awarded the following medals: Army commendation medal, Army Achievement Medal, Army Good Conduct Medal (4th award), National Defense Service Medal (Bronze start) Global War on Terrorism Service Ribbon (2nd award), Armed Forces Reserved Medal (10 year device) California Unit Award, California Service Ribbon, California Trainer Ribbon, Sharp-Shooter Rifleman Badge, Grenade Marksmen Badge, Drivers Badge.

Melvin Bud Weber (Colonel with the USAF) passed away on Saturday January 26, 2019.

He had many friends in Boyle Heights and at Roosevelt. He would want them to know. He was a recipient of the Roosevelt Alumni Association Teddy Award - a WWII veteran and loved his hometown of Boyle Heights

Nellie married her teenage sweetheart, Rudy Bustillos and they moved to Tucson, Arizona in 1973. Nellie and Rudy had four children, 10 grandchildren and 7 great-grandchildren.

Class of 1971, married Norma Saldana, class of 1971. Two children, Paul Steven, and Jamie J.
Both married. One grand-daughter, Carly Ann, the love of his life. Rest in peace. 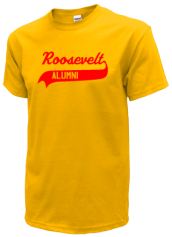