Have you lost your Rhinelander High School class ring? Have you found someone's class ring? Visit our Hodags lost class ring page to search for your class ring or post information about a found ring.

Garrett Bruce Frank died peacefully June 12, 2017, in Van Nuys, Calif, at the age of 75. He was a 1959 graduate of Rhinelander High School, the first graduating class of the newly-built high school. He went on to graduate from Dr. Martin Luther King College in New Ulm, Minn. There he met his wife, the former Cheryl Miller, and had three daughters. He pursued his career in the Lutheran Ministry which eventually landed them in Colorado Springs, Colo. and other parts of the world.

Following a stroke in 2006, he moved to California to be closer to family, where he has resided since. Among his passions were his love for God, his faith, his children/grandchildren and the Green Bay Packers naturally.

He was preceded in death by his parents, Orville (Bud) and Gladys Frank, his sister, Teri (Frank) Profumo, Columbus, Ohio. He is survived by his sister, Mavis Winkler of Rhinelander.

There will be no funeral services as his wish was to donate his body to science. Condolences can be sent to his family in care of Juanita Gilliland, 2634 Springbrook Ct., Thousand Oaks, CA 91362

Airman Davies was serving with the 7th fleet off the coast of North Vietnam aboard the USS Forrestal and was killed in the explosion and fire that claimed 135 lives.

Passed away from late-term dementia at the age of 71 in Columbus, OH.

Private First Class Hurkmans was a scout dog handler serving with the 39th Infantry when killed in Vietnam. 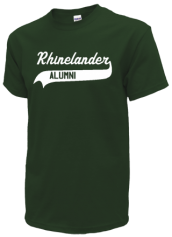 Read and submit stories about our classmates from Rhinelander High School, post achievements and news about our alumni, and post photos of our fellow Hodags.

Tickets are now on sale! Buy now for a discounted price! Use the link below:
https://www.eventbrite.com/e/rhs-c...
Read More »