Have you lost your Reagan High School class ring? Have you found someone's class ring? Visit our Bulldogs lost class ring page to search for your class ring or post information about a found ring.

Dorah passed away in March 2014. I have not received any new information as of yet. What a wonderful person to have known.

James passed away at the beginning of 2014. I have not received details but he will be missed.

Janice Passed after a short battle with cancer

My beautiful sister and best friend lost her battle with cancer at the young age of 20. It has been 20 years and I still think about her everyday. I miss you more and more everyday sis.

Kenny Martin has passed from this world to eternal life. He was in California at the time staying with his sister and her family. The official cause was listed as congestive heart failure, however, he passed away in his sleep. Kenny was only 52 years old. He will always be remembered. He has two children and one grandson.

Died from complications arising
from Diabetes and Heart Disease.

Miles (MC) was killed in a personal watercraft accident on Lake Conroe. He was a husband, a father, and freind. Miles will be sadly missed.

Born in Beaumont, Texas on February 15, 1943. Died June 1, 2010 of complications from treatments for throat cancer in Houston, TX. Graduated from Texas A&M in 1965. Founded Zapp's Potato Chips in 1985 in Gramercy, LA. Was a resident of Baton Rouge, LA at the time of his death. He donated time, money and LOTS OF CHIPS to numerous charities. Survived by his wife, Anne Grantham Zappe, daughter, Kristin Zappe Hopper and son, Eric Campbell Zappe.

Died suddenly of a heart attack on January 4, 2010. Rusty had a varied and interesting life and career. He was a musician, artist, stuntman, actor, hunting guide and collector of any type of western memorabilia. Movies he was in include "The Wind and the Lion," "The Great Waldo Pepper," and "Buffalo Bill and the Indians." On May 1 many of his friends including a large number of Reagan alumnae attended the scattering of his ashes on the Y.O. Ranch in Mt. Home, Texas. Now he is truly "home on the range" with deer, buffalo, longhorns and other creatures great and small. 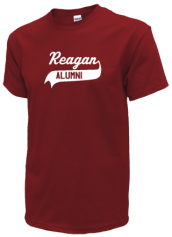 Read and submit stories about our classmates from Reagan High School, post achievements and news about our alumni, and post photos of our fellow Bulldogs.