Have you lost your Powhatan High School class ring? Have you found someone's class ring? Visit our Indians lost class ring page to search for your class ring or post information about a found ring.

Adam Lee Bagby
Class of 2001
Army, 10 Years
I served in the 527th Military Police Company, of the 709 MPBN, 18th MPBDE, 5th Corps. In Germany, then was apart of the initial invasion into Iraq. We were the first MP's to cross the birm. In my service I was awarded with a Purple Heart, recommended for two Bronze Stars, received two Army Comendation Medals, one with Combat V, two Army Achievement Medals, and various other Meritorious Service Medals and Awards including Presidential Citation and others.
Report a Problem

Devin Ford Lerch
Class of 2001
Marine Corps, 8 Years
Still in the Marines and going stronger than ever!!
Report a Problem

James Mell
Class of 1983
Army, 13 Years
Served in desert storm. Got out a Seargent.
Report a Problem

Lee Baird
Class of 1989
National Guard, 12 Years
Served in Army National Guard in Virginia and North Carolina. Served as a Medical specialist, and Medical Section Sergeant for a MP unit in NC.
Report a Problem

Thomas R. Brown
Class of 2000
Marine Corps, 9 Years
Served as a light infantry machine gunner from 2000 to 2004 at Camp Lejeune, NC and Okinawa, Japan. US Embassy Guard in Ashgabat, Turkmenistan and Frankfurt, Germany. Also served as a guard on Secretary of State Powell's detail. Served as a Mobile Assault Section leader in Fallujah, Iraq in '06. Served as an intelligence and operations watch officer in Ramadi, Iraq. Currently an infantry unit leader awaiting orders for Southern Afghanistan.
Report a Problem 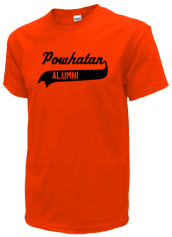 Read and submit stories about our classmates from Powhatan High School, post achievements and news about our alumni, and post photos of our fellow Indians.

View More or Post
In Memory Of
Our Powhatan High School military alumni are some of the most outstanding people we know and this page recognizes them and everything they have done! Not everyone gets to come home for the holidays and we want our Powhatan High School Military to know that they are loved and appreciated. All of us in Powhatan are proud of our military alumni and want to thank them for risking their lives to protect our country!