Have you lost your Pennsville Memorial High School class ring? Have you found someone's class ring? Visit our Eagles lost class ring page to search for your class ring or post information about a found ring.

Daryll Slimmer
Class of 1995
Army, 12 Years
I enlisted in the winter of 1995 and right after Christmas I attended Basic Training at Ft. Sill, Ok. Immediately following Basic Training, I attended Advanced Individual Training (AIT) at Ft. Bliss TX. After graduating AIT, I was stationed in Kaiserslautern, Germany. Shortly after my arrival, I was deployed to Saudi Arabia as a Patriot Missile Crewmwmber. I spent the next 2 years in Germany before our unit was moved back to Ft. Bliss, TX.

After leaving Active Duty, I joined up with the NJ National Guard which I am still a member. I have been stationed in Hammonton, Pemberton, Bordentown and lastly Mt. Holly. In the summer of 2005, I voluntered for the war in Iraq and was then deployed to Balad Iraq. Our National Guard unit was extended due to the surge and to date, are in the record books as being the unit with the longest tour during the war. I currently serve as an Observer/controller/trainer at Ft. Dix, assisting in the training of soldiers that will be deployed this June.

Karen Claxton
Class of 1999
Air Force, 11 Years
I have been in almost 11 years. I started out as a Weapon's Loader on F-16s and A-10s. I was stationed at Luke AFB, Osan AB, Luke AFB again. Then after 6 years i decided to cross-train and try a new job out. So i then became a Medical Technician-worked on the Med-Surg ward and Women's Health clinic while stationed at Langley AFB and I am currently at RAF Croughton, UK working in the Family Practice clinic and will be here for 3 years, then off to somewhere else. I am also working on my Bachelor's Degree and am going for nursing. i plan to stay in until my 20 years come around and then i am out! I finally made E6 and will be sewing on this January 1st 2011. (My married name is Sheffer)
Report a Problem

Leonard C Purnell
Class of 1963
Air Force, 19 Years
Leonard served in the United States Air Force, did a tour of duty in Da Nang, Vietnam, was a member of the ANG 166 MS DE, and received letters, ribbons and recommendations of service awards, and was honorably discharged after 20 years of service.
Report a Problem

Myles Gill Jr. SFC (Ret)
Class of 1967
Army, 20+ Years
24 years in as a Combat Airborne Engineer. Station oversea in Vietnam, Korea, Italy, and two time in Germany. Have been in Central America and Mediterranean. I have 21 Medals starting with Bronze Star, 2 Purple Heart, 2 Meritorious Service ,and have a CIB, Master Parachutist, Drill Sgt, Ranger, and Sapper.
Report a Problem

Robert J Shiles
Class of 1985
Navy, 20+ Years
Joined the US Navy delayed entrty program in June 1984, left for boot camp Great Lakes, IL, June 1985, two weeks after graduation. Graduated boot camp August '85, and atteneded Hull Maintenace Techician (HT) "A" School, at Philadelphia Naval Shipyard. Reported to USS Moinester FF-1097, 28DEC85, NOB Norfolk, and spent 3 1/2 years there, including 2 Med Cruises, and earning my Blue Nose by crossing the Artic Circle in OCT'86. Converted over to Damage Controlamn (DC) in 1988, making DC2 in Jun'89. Also earned my Enlisted Surface Wafare Specialist in APR'89. Aug'89 transefered and attended 6 weeks at the Navy Phyiscal Security School at Lackland AFB, San Antonia, TX. Upon completion was station at NCTANSLANT (communications station) Norfolk for 3 years. Spedning time in both the Security and Facilities Maintenance Depts. OCT'92 transfered and spent 3 weeks at Ft McClellan, AL, for CBR Defense Specialist training. NOV'92 reported to USS Yorktown CG48, NOB Norfolk, spending a little over 5 yrs aboard, making 1 Med Cruise & 1 major DrugOp deployment, and making DC1 in DEC'93. Transfer DEC'97 and spent the next 3 years on shore duty at NAS & NOB Norfolk Base 1St Lt. Jan'01 reported to USS Elrod FFG55, and in SEP'01, deployed a week after 9/11 as part of Operation Eduring Freedom. In APR'04 deployed on my last (5th Med Cruise) major deployment 2nd on Elrod. Retiring in June 1985. Served with many a great bunch of guys as each command. Lost a few along the way, R.I.P. Brothers. Shared some lasting memories, and have some that I wish I could forget. Proud to be a member of a Brotherhood that only those who have served can and do understand!! Salutes to my fellow Alumni, Past, Present, and Future!! Go Navy, it's not just a job, it was an adventure!!
Report a Problem

Main job was a Gunnersmate worked on and with all types of weapons. Also trained other people on these same weapons. Also did law enforcement for drugs & pleasure boats. 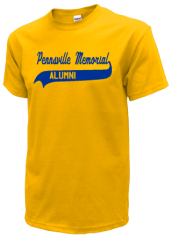 Read and submit stories about our classmates from Pennsville Memorial High School, post achievements and news about our alumni, and post photos of our fellow Eagles.

My name is Nancy Mills, and I am from the class of 1973. I am a therapist and have a non-profit Christian ministry, New ...
Read More »

View More or Post
In Memory Of
Our Pennsville Memorial High School military alumni are some of the most outstanding people we know and this page recognizes them and everything they have done! Not everyone gets to come home for the holidays and we want our Pennsville Memorial High School Military to know that they are loved and appreciated. All of us in Pennsville are proud of our military alumni and want to thank them for risking their lives to protect our country!