Have you lost your Peabody Veterans Memorial High School class ring? Have you found someone's class ring? Visit our Tanners lost class ring page to search for your class ring or post information about a found ring.

Allan Marshall
Class of 2004
Marine Corps, 4 Years
Infantry Machine gunner. Deployed to Marjah, Afghanistan in support of Operation Enduring Freedom from June 2010-January 2011 and to Trek Nawa, Afghanistan from November 2011-May 2012 with a military working dog to sweep for improvised explosive devices while on foot patrols throughout the Helmand Province.
Report a Problem

Daniel B. Kulak
Class of 1960
Army, 2 Years
Served as a Captain. Viet Nam February 1969 - February 1070 with the 1st Aviation Brigade
Report a Problem

Karen Bell
Class of 1990
Air Force, 20+ Years
Tour highlights: Germany, Saudi Arabia, Iraq and a joint tour to Iraq with the US Army
Report a Problem

Richard A Pierce
Class of 1963
Navy, 3 Years
Naval Communications Technician ( CT-2) Stationed in the Philippines and Japan.
Report a Problem 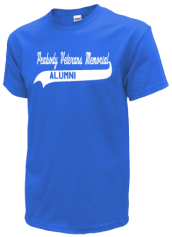 Read and submit stories about our classmates from Peabody Veterans Memorial High School, post achievements and news about our alumni, and post photos of our fellow Tanners.

Post Your News
Our Peabody Veterans Memorial High School military alumni are some of the most outstanding people we know and this page recognizes them and everything they have done! Not everyone gets to come home for the holidays and we want our Peabody Veterans Memorial High School Military to know that they are loved and appreciated. All of us in Peabody are proud of our military alumni and want to thank them for risking their lives to protect our country!