Have you lost your Oak Hill High School class ring? Have you found someone's class ring? Visit our Golden Eagles lost class ring page to search for your class ring or post information about a found ring.

Adam Buck
Class of 2001
Navy, 2 Years
Served in the US Navy as an Electronic Technician for two years. Based on CG-73 USS Port Royal out of Pearl Harbor, HI.
Report a Problem

Brandon Kellogg
Class of 2003
Army, 6 Years
A Sergeant in the United States Army Infantry with 2 tours of combat to Iraq. A highly decorated veteran who has who has served in Baghdad, Fulija, Hawijah, and Sadr City to name a few. Sergeant Kellogg was on a CNN documentary with Doug Grindle with a look into their day to day air assault operations, along with a documentary called Gods Soldiers with a look into day to day operation in Hawijah Iraq. Sergeant Kellogg has moved back home after his time in service so his kids could attend the Oak Hill school corporation.
Report a Problem

Jawn Oilar
Class of 1985
Army, 20+ Years
Currently still serving as a Sergeant Major. He is the senior medical advisor for the 1st Infantry Division at Fort Riley Kansas. Deployed to Somalia and Iraq. Scheduled to deploy to Iraq again in July 2010
Report a Problem

Jim (Stephen) Horsman
Class of 1966
Army, 14 Years
Entered US Army 3 Aug 1967 and served during the Vietnam Era. Served 2 tours in Korea; therefore, I am a Veteran of a Foreign War. Also, served 2 tours in Japan. Left the service on 12 Aug 1981. In 1986 began working for US Department of Agriculture (USDA) Farmers Home Administration which is now USDA-Rural Development. As of 25 Dec 2011 I have 40 years of Federal Service.
Report a Problem

Patrick Moore
Class of 1997
Army, 3 Years
Served in Republic of Korea and Hawaii.
Report a Problem

PHILLIP DAWALT
Class of 1996
Coast Guard, 13 Years
Phillip is a chief Boatswains mate and is currently serving in California on an 87' patrol boat. Phillip served at the north pole as a scuba diver. He has traveled all around the world.
Report a Problem

Randall Glenn
Class of 1971
Air Force, 20+ Years
Could have pushed the button!!!
Report a Problem 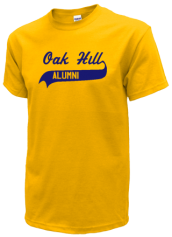 Read and submit stories about our classmates from Oak Hill High School, post achievements and news about our alumni, and post photos of our fellow Golden Eagles.

Deanna passed away on December 24, 2018 at her long time residence in Stuart, FL.
Read More »

View More or Post
In Memory Of
Our Oak Hill High School military alumni are some of the most outstanding people we know and this page recognizes them and everything they have done! Not everyone gets to come home for the holidays and we want our Oak Hill High School Military to know that they are loved and appreciated. All of us in Converse are proud of our military alumni and want to thank them for risking their lives to protect our country!