Have you lost your North County High School class ring? Have you found someone's class ring? Visit our Knights lost class ring page to search for your class ring or post information about a found ring.

Brian A. Jeffries
Class of 2006
Navy, 4 Years
Petty Officer 2nd class - stationed on the uss boxer out of San Diego, CA - mass communication specialist. Attended Bowie state university - then decided to serve country in the navy to continue education and see the world. Been to Hawaii - Korea - Dubai - Singapore just to name a few places. Love serving the USA.
Report a Problem

Chris Birely
Class of 1992
Army, 8 Years
I was an 11B(Infantryman). I served active duty from 1995-2002. I was stationed at places like South Korea, Ft. Hood Texas, Vilseck, Germany, Ft. Riley, Kansas, and Ft. Benning, Georgia
Report a Problem

Morris "Speedy" Harris
Class of 1999
Army, 5 Years
After graduating from North County in 1999, Morris also known as Speedy, join the United States Army on September 15th, 2000. After completing basic and advanced individual training in Fort Sill Oklahoma, he was then stationed in Fort Hood Texas with the First Cavalry Division 1st of the 21st Field Artillery Battalion. Moving through the ranks very quickly, Morris was promoted to Sergeant E5 in September of 2003 and Deployed to Iraq for Operation Iraqi Freedom in March of 2004. In October of 2004 Morris was injured in Iraq when his Humvee was struck by an Improvised Explosive Device. After a three week stay in the Brooke Army Medical Center in San Antonio Texas, Morris was awarded the Purple Heart Medal for wounds received in action while deployed in a combat zone. Morris went on to separate from the military that following year, and is now pursuing his business degree at UMBC
Report a Problem

SSG Joseph D. Walker
Class of 2002
Army, 10 Years
SSG Joseph Walker was a class of 2002 Graduate at North County high school. He attended NCHS from 1999-2002 where he was an avid drama club member and a member of the International Thesbian Society. SSG Walker was a star of every "One Act" play from 99-02, winning best actor in the 2002 play. He also had a lead role as "Guts" Regan in the Ann Rand play "Night of January 16th. Upon graduating high school, he enlisted in the US Army in Baltimore as a Private Second class. SSG Walker spent his time stationed at multiple places during his time and spend 14 months in Iraq in support of the 2007 "Surge." He was an active paratrooper, having 35 jumps under his belt and even finished Jumpmaster school. Tragically, during a jump in May of 2011, SSG Walker broke his L1 vertabrae and in Jan of 2013, he was medically retired from the Army after 10 years of service. He currently resides in Annapolis, MD
Report a Problem 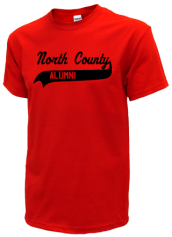 Read and submit stories about our classmates from North County High School, post achievements and news about our alumni, and post photos of our fellow Knights.

Post Your News
In Memory Of
Our North County High School military alumni are some of the most outstanding people we know and this page recognizes them and everything they have done! Not everyone gets to come home for the holidays and we want our North County High School Military to know that they are loved and appreciated. All of us in Glen Burnie are proud of our military alumni and want to thank them for risking their lives to protect our country!