Have you lost your Mt. Healthy High School class ring? Have you found someone's class ring? Visit our Fighting Owls lost class ring page to search for your class ring or post information about a found ring.

Allen Wilhelm
Class of 1965
Navy, 4 Years
Served on the west coast out of Miramar California. Home of Top Gun! 3 West Pac cruises aboard the USS Hancock and Bon Homme Richard.

Our squadron VF-24 shot down 5 migs during our time in Vietnam.

Angela (Plum) Horn
Class of 1985
Navy, 10 Years
6 years on the USS Samuel Gompers and 4 years in DC. Proud to have served my country!
Report a Problem

Clarence Spencer
Class of 1984
Air Force, 4 Years
Clarence passed away shortly after he was honorably discharged from the Air Force and was a LA Police Officer.
Report a Problem

Clifford Bea
Class of 1985
Army, 20+ Years
Cliff went straight from High School and into the Army. He served in both Desert Storm and iraq where he was deployed twice. He was promoted to Staff Sargeant and is now home safe until he is called again.
Report a Problem 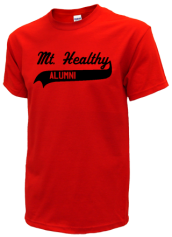 Read and submit stories about our classmates from Mt. Healthy High School, post achievements and news about our alumni, and post photos of our fellow Fighting Owls.

Post Your News
In Memory Of
Our Mt. Healthy High School military alumni are some of the most outstanding people we know and this page recognizes them and everything they have done! Not everyone gets to come home for the holidays and we want our Mt. Healthy High School Military to know that they are loved and appreciated. All of us in Cincinnati are proud of our military alumni and want to thank them for risking their lives to protect our country!