Have you lost your Mt Carmel High School class ring? Have you found someone's class ring? Visit our Sundevils lost class ring page to search for your class ring or post information about a found ring.

Barry Pealstrom
Class of 1980
Navy, 20+ Years
21 years as a fast attack submariner. Deployed 6 times onboard USS Parche, the most decorated submarine in the US fleet. Retired as a Chief, son at USNA.
Report a Problem

Bob Nesbit
Class of 1981
Air Force, 20+ Years
Korean linguist in the Air Force for 20 years. 10 years of my career was spent in Korea keeping the morning calm. Flew AWACS for Operation Southern Watch. Stationed at the Presidio of Monterey in CA, Osan Air Base, Ft. Meade, Tinker Air Force Base. Retired in 2005 with 20 years of service.
Report a Problem

Carl Prescott
Class of 1984
Army, 12 Years
12 Years Service in the U.S. Army. In the Armored Cavalry. Numerous deployments. While stationed in Germany, I spent 5 years patroling the "Iron Curtain" : East German - Czecholslavakian Border. I served with the 2nd Armored Cavalry Regiment in Operation Desert Shield and Operation Desert Storm. 1990-1991. 1992 to 1996 was spent Stateside as part of a Rapid Deployment Force.
Report a Problem

Jason Wos
Class of 1989
Army, 11 Years
Served in Special Ops while on active duty, then joined the reserves.
Report a Problem

Jenine Putman-Kopet
Class of 1988
Air Force, 12 Years
What a journey and one I will never regret. Spent two terms Active duty air force spending equal to 4 years overseas with deployments all over the world and one term in the Air National Guard back in San Diego. I would have gone back as a commissioned officer, but after gaining my Masters Degree in business, I decided to stay in the education field and settle down.
Report a Problem

Katherine Covington Austin
Class of 1991
Navy, 13 Years
I am a physician in the Navy currently stationed overseas in Italy but returning this summer to VA
Report a Problem

The most fun I had while in the Army, had to be first, Fort Ord, CA conducting Law Enforcement duties, second at Fort Riley Kansas - the numerous deployments, a raging forest fire in Idaho in 94, third, two years as a Demolition's Instructor at Fort Leonard Wood, Missouri and last, my assignment at Fort Lewis, Washington. 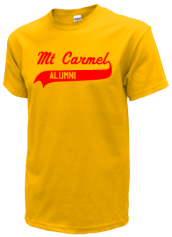 Read and submit stories about our classmates from Mt Carmel High School, post achievements and news about our alumni, and post photos of our fellow Sundevils.

My apologies, I am hoping to either purchase a 1988 yearbook or to simply pay $10/page for color scanned copies of 4 ver...
Read More »

View More or Post
In Memory Of
Our Mt Carmel High School military alumni are some of the most outstanding people we know and this page recognizes them and everything they have done! Not everyone gets to come home for the holidays and we want our Mt Carmel High School Military to know that they are loved and appreciated. All of us in San Diego are proud of our military alumni and want to thank them for risking their lives to protect our country!