Have you lost your Marshalltown High School class ring? Have you found someone's class ring? Visit our Bobcats lost class ring page to search for your class ring or post information about a found ring.

Christy Harmon Forbes
Class of 1985
Army, 2 Years
Served from August 1985 to February 1988. Basic was at Ft. Jackson. Then went to Korea.
Report a Problem

Jack Douglas Olson
Class of 1968
Army, 3 Years
Served two years in California and one in Viet Nam
Report a Problem

jeff kinney
Class of 1980
Army, 4 Years
4 years in the infantry. 2 years in germany and 2 years at fort ord ca.
Report a Problem

Mark E. Wolken
Class of 1975
Army, 20+ Years
Retired in the DC area after 28 years of service in various assignments around the world that took me to 30+ different countries.
Report a Problem 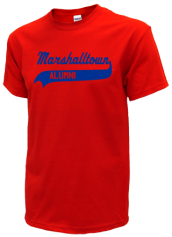 Read and submit stories about our classmates from Marshalltown High School, post achievements and news about our alumni, and post photos of our fellow Bobcats.