Have you lost your Kodiak High School class ring? Have you found someone's class ring? Visit our Kodiak Bears lost class ring page to search for your class ring or post information about a found ring.

Bill Thomson
Class of 1983
Air Force, 20+ Years
Spent 10 years as a firefighter and 10 years as aircrew member aboard AWACS. Saw and learned a lot. Some of the best years of my life. Thank you to all who have served.

Also I want to express my heart-felt appreciation for all who supported us and continue to support the current generation; Thank You!!

Bill Thomson
Class of 1983
Air Force, 20+ Years
Joined right out of school to become a firefighter. My first assignment was to Aviano Italy. Oh man, an 18 year old kids mixed in with all the wonder of Europe in the Eighties. Traveled most of Europe over my seven years there before returning to the states.

After ten years I cross trained to become an aircrew member on the E3 AWACS. Spent much time in the desert in Turkey. Saw many different coutnries, did the Kosovo thing - couple of harry moments, and retired in 2004 as a MSgt.

Would not trade that life experience for anything in the world!

Bob Richmond.
Class of 1961
Army, 2 Years
Served in Asia for two years after attending the combat platoon leaders course and paratrooper schools at ft Benning and army intelligence schools The details of my service are classified and under seal at the pentagon
Report a Problem

Dale Gray
Class of 1969
Navy, 20+ Years
Went straight from High School to the Navy in 1969. Enlisted in Anchorage. Went straight to Vietnam in VQ-1. Got to see alot of the world in my 21 years. Since them have been A nursery Sales Manager for a 750 acre nursery.
Report a Problem

Rick Schwabe
Class of 1977
Coast Guard, 20+ Years
13 years of Sea duty and 14 years of shore duty.
Spent a lot of time sailing the Carribean, and also sailed the Mediterranean and Black seas. Served as the Chief of Security at my last unit before retiring
I 've been the XPO of thee units and retired a Chief Boatswainsmate. 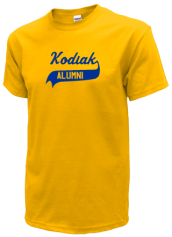 Read and submit stories about our classmates from Kodiak High School, post achievements and news about our alumni, and post photos of our fellow Kodiak Bears.

View More or Post
In Memory Of
Our Kodiak High School military alumni are some of the most outstanding people we know and this page recognizes them and everything they have done! Not everyone gets to come home for the holidays and we want our Kodiak High School Military to know that they are loved and appreciated. All of us in Kodiak are proud of our military alumni and want to thank them for risking their lives to protect our country!