Have you lost your Interboro High School class ring? Have you found someone's class ring? Visit our Buccaneers lost class ring page to search for your class ring or post information about a found ring.

Barbara (Lower) Camarota
Class of 1989
Army, 1 Years
I was Honorably Discharged while in AIT. I had 3 screws put in my upper right femur to keep the broken femur from dislocating. I am now a Disabled Vet.
Report a Problem

Guy Wilson
Class of 1975
Air Force, 20+ Years
Served 4 years in the Army finishing as a tank commander instructor at Fort Knox. I switched to the Air Force where I was a crew chief on F4 Phantoms and F15 Eagles. I was an instructor for 8 years and retired as the wing training manager at Columbus AFB MS.
Report a Problem

He was born in Tawas City Michigan; and grew up in Norwood, PA and currently resided in Screven Georgia.
He retired from the United States Army where he served from June 1979 until June 1998: he served as a Tank Commander in Desert Storm; he was awarded the following awards, the Bronze Star with Valor, Meritorious Service Medal, four Army Commendation Awards, six Army Achievement Medals, six Army Good Conduct Medals, National Defense Service Medal, Southwest Asia Service Medal and three Noncommissioned Officers Development Ribbons.
He was a current employee of Southern Nuclear Company;.
He helped establish the United States Military Veterans Motorcycle Club were he served as the Surrency Chapter President.
He also helped start the Wayne County STAR Program.

Robin Hiddemen
Class of 1974
Navy, 20+ Years
I joined the Navy after graduating college in 1978 and served as an Engineer for 26 years. The Navy was good to me.
Report a Problem 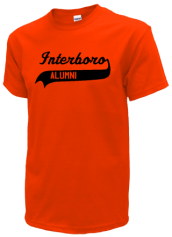 Read and submit stories about our classmates from Interboro High School, post achievements and news about our alumni, and post photos of our fellow Buccaneers.

Vote for Bucs Make a Musical

Please take a minute to click on this link and vote for our high sch...
Read More »

View More or Post
In Memory Of
Our Interboro High School military alumni are some of the most outstanding people we know and this page recognizes them and everything they have done! Not everyone gets to come home for the holidays and we want our Interboro High School Military to know that they are loved and appreciated. All of us in Prospect Park are proud of our military alumni and want to thank them for risking their lives to protect our country!