Have you lost your Indian Valley High School class ring? Have you found someone's class ring? Visit our Braves lost class ring page to search for your class ring or post information about a found ring.

Casey R Crum
Class of 2007
Air Force, 4 Years
I am in Air Transportation. which is loading and unloading cargo planes.
Report a Problem

Chris Lewis
Class of 1995
National Guard, 13 Years
Starting in August of 1995 I served 3 years on active duty at FT Lewis WA. then joined the Ohio Army National Guard in 1998. During my 13 years of service I have been a M1A1 Tank driver, loader, and gunner. I served as an Operations Non-Commissioned Officer (NCO)and was deployed to Kosovo in 2004-2005 as the Assistant Operations NCO for my shift. I also mobilized to help with the Hurricane relief in 2005. We were based out of an airport in Lake Charles, LA and worked closely with the populace in our relief efforts. In 2006 I changed my Job specialty to be a Network systems administrator and have been the LAN manager for my Brigade since graduating from my military school. I have deployed to the Middle East in support of Operation Iraqi Freedom to be the Information Management Officer for the base camp I am stationed at. I am proud to serve my country and the most decorated National Guard unit in the state, “The Buckeye Brigade.”
Report a Problem

CRAIG BELKNAP
Class of 1993
Army, 3 Years
As active duty I was mechanized infantry(11m)
My 5 years with the Ohio National Guard I was regular infantry and anti armor(11b/11h)

JOHN VARELA
Class of 2007
Marine Corps, 1 Years
IM GOING TO IRAQ IN APRIL OF NEXT YEAR PRAY FOR ME
Report a Problem 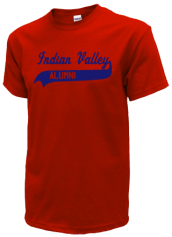 Read and submit stories about our classmates from Indian Valley High School, post achievements and news about our alumni, and post photos of our fellow Braves.

View More or Post
In Memory Of
Our Indian Valley High School military alumni are some of the most outstanding people we know and this page recognizes them and everything they have done! Not everyone gets to come home for the holidays and we want our Indian Valley High School Military to know that they are loved and appreciated. All of us in Gnadenhutten are proud of our military alumni and want to thank them for risking their lives to protect our country!