Have you lost your Haltom High School class ring? Have you found someone's class ring? Visit our Buffalos lost class ring page to search for your class ring or post information about a found ring.

Adam Winkenweder
Class of 2003
Army, 4 Years
Active Duty, served 1 tour in Iraq and is currently on his 2nd tour to Iraq.
Report a Problem

James Fiaccone
Class of 2002
Coast Guard, 2 Years
Severed for a year and a half on the USCGC Biscayne Bay. Currently station at the Coast Guard Pay and Personnel Center.
Report a Problem

James Jenner
Class of 2006
Army, 4 Years
Serving the Medical Corp with pride and has served in Iraq
Report a Problem

James North
Class of 1992
National Guard, 7 Years
Served from 1992-1996 in the active Army then reenlisted in 2007 in the National Guard been ti Iraq once and Headed to Afghanistan next year.
Report a Problem

Johnny Ramirez
Class of 1983
Army, 20+ Years
Enlisted in and served in the Marines upon graduation and stayed until 1999, Joined the Army in 1999 and am currently serving in El Paso TX. I have lived in Hawaii, South Korea, and Germany. I have deployed once to Iraq and twice to Afganistan.
Report a Problem 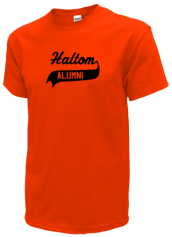 Read and submit stories about our classmates from Haltom High School, post achievements and news about our alumni, and post photos of our fellow Buffalos.

On April 27, 2013 the Foundation will pay tribute to the leadership of our nation’s military and government servic...
Read More »

View More or Post
In Memory Of
Our Haltom High School military alumni are some of the most outstanding people we know and this page recognizes them and everything they have done! Not everyone gets to come home for the holidays and we want our Haltom High School Military to know that they are loved and appreciated. All of us in Haltom City are proud of our military alumni and want to thank them for risking their lives to protect our country!