Have you lost your Freeman High School class ring? Have you found someone's class ring? Visit our Scotties lost class ring page to search for your class ring or post information about a found ring.

His memorial service is going to be at the Freeman High School on November 16, 2008 at 1 PM.

ARNESON, Larry D.
(Age 54)
"THE WINGED WARRIOR
OF FREEMAN HIGH 1973"
Larry passed away on October 26, 2008 at Sacred Heart Hospital surrounded but his wife, son and mother, after fighting a courageous battle with cancer. Larry was born on October 15, 1954 to Robert and Leslie Arneson in Spokane and raised on the family farm near Rockford, WA homesteaded by his great-great grandparents Aaron and Louisa Arneson in 1900. He graduated from Freeman High School in 1973 where he earned his "Winged Warrior" title with help from his '59 Dodge and its 413 engine. It flew! Larry was married to Zoe Hall, his high school sweetheart in 1978. He later built their dream home on the original homestead site, after the shop was built first. He was a general contractor in residential construction and ended his carrier doing fine finish work in several multimillion dollar homes, working with the finest builders who became great close friends. Their son, Lucas, was born in 1982 and is the light of their lives. Father and son were inseparable to the end. Larry began drag racing in 1974 at Raceway Park. He couldn't get enough, passing the racing fever on to his son in the 80's. By 1999, Larry became the crew chief for Lucas, helping him win many trophies. In 2000 Lucas won 2nd place in the Street Eliminator Class, the youngest racer to do that. He also competed in his first national world finals event, winning his class and setting a national record. Larry still did his best to coach Luke's racing up until a month ago from his hospital bed. Using cell phones, writing down stats, helping dial the car in by phone while Lucas was racing in Boise, ID . There was unending pride between father and son. Larry enjoyed trap shooting with Lucas at the Rockford Gun Club and the Spokane Gun Club, and the interaction with all the members of both clubs. Finally, he loved entering his '59 Dodge Custom Royal D500 in classic and Mopar car shows. It was his dream car since high school and he owned several through the years. Larry is survived by his wife Zoe of 30 years, his son Lucas, sister Judy Arneson-Johnson of Endicott, mother Leslie Arneson-Purcell and Phill, along with several aunts, uncles, nieces, nephews, cousins and inlaws. Larry was preceded in death by his father Robert Arneson. A memorial celebration will be held Sunday, November 16th at 1:00 pm at Freeman High School. Honorary pall bearers please arrive at noon. A private inurnment will be held at a later date. Our heart felt appreciation goes to the nurses and NACs of 7 South at Sacred Heart Hospital for their exceptional care, Larry cared for you all. To Dr. Wittenkeller and his staff, thank you for your continued efforts and giving Larry the will to keep going. To Joanna B. - "Trouble" will touch base with you later! The family requests memorial contributions may be made to the Rockford United Methodist Church, 217 S. 1st St., Rockford, WA 99030.

Loren went to school all 12 years and graduated with the class of 1973. He was active in Junior Grange and 4-H. A kind and considerate boy, his passing was tragic. His funeral was held at the Lutheran Church in Fairfield. 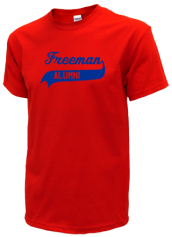 Read and submit stories about our classmates from Freeman High School, post achievements and news about our alumni, and post photos of our fellow Scotties.