Have you lost your Eustis High School class ring? Have you found someone's class ring? Visit our Panthers lost class ring page to search for your class ring or post information about a found ring.

Friendly, caring and fun-loving
Died much too young.

Aleta graduated in 1964 - went to UofF - moved to Atlanta where she lived her entire adult life - worked at Rich's Department stoe for many years. Is survived by her Life Partner, Ron Stewart. A

Allen lived a full life which included service in the United States Navy which allowed him to travel the world. He graduated from Edison Community College in Ft. Myers. In 2005, Allen was to marry his fiancee Kellie and adopt her daughter, Erika. Allen was the Regional Manager for Adelphia Security Systems in Ft. Myers. He is greatly missed by his family (Dad: James, 1954 graduate of Umatilla High; Mom: Glenda, 1961 graduate of Eustis High and sister: Rebecca "Becky" Pippin McKay, 1981 graduate of Eustis High) and his many friends.

She passed in her sleep this year and will be greatly missed.

Joey's passing was sudden and unexpected. His passing left a big hole in the lives of those who knew and loved him. Joey was always there to lend a hand to those in need and he did it with a smile. We love and miss you Joey, the reunions just aren't the same without you., heck, Life isn't the same without you. Joey is survived by his wife Renee and his 2 sons, Ethan and Nash. He is also survived by his Parents Bruce and Sandy Smith; Brother, Justin; Sisters Julie and Jennifer and many many many many friends.

Lane died in a car accident when he lost control of his vehicle on Lake Shore Dr. 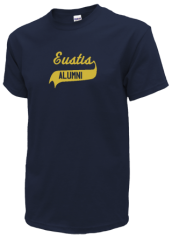 Read and submit stories about our classmates from Eustis High School, post achievements and news about our alumni, and post photos of our fellow Panthers.

This year the American Cancer Society is having their Relay for Life at Eustis High School on April 8th. What better way...
Read More »