Have you lost your Durango High School class ring? Have you found someone's class ring? Visit our Demons lost class ring page to search for your class ring or post information about a found ring.

Jeff Cothern
Class of 1991
Marine Corps, 8 Years
Served In the Marine Corps from 91 to 1999. Still works with Military members today.
Report a Problem

fluid Tecknition Made Liquid Oxygen for piolet breething. Depending on where we were Oxygen for all purpues

Sean Carman
Class of 1992
Navy, 4 Years
Spent 4 years in Japan. I would not trade it for anything
Report a Problem

Stephen Fuller
Class of 1990
Navy, 11 Years
Spent 2 yes COARNG then regular army till 2000, left army joined the navy as a corpsman assigned to the marines.
Report a Problem

Tim Turner
Class of 1968
Army, 10 Years
Captain Timothy W. Turner was the Detachment Commander for the 1064th Assault Helicopter Maintenance Company, Nebraska National Guard, Lincoln, Nebraska. As Commander was responsible for modeling leadership, building coalitions/communications and business acumen by planning, organizing and conducting sensitive and complex military operations, activities and training of a military aircraft maintenance company. Additionally, managed and coordinated the activities and the multi-million dollar budget of this military aircraft maintenance company. Developed work and training schedules, assigned details, provided regular evaluations of officers and enlisted personnel for this diverse workforce and maintained proficiency as a PIC in multiple aircraft.
Prior to assuming this position, Captain Turner was the Department Head of the Naval Administrative ‘A’ School, Naval Technical Training Center, Meridian, Mississippi. He directed a multi-disciplinary program as a Naval Officer and pilot. Supervised a staff of 60 people and 350 students responsible for the administration and execution of all military and technical training programs of two Navy and one Marine ‘A’ school. Captain Turner directed planning, research and curriculum development for and modification to academic and military training programs. As department head he was responsible for the financial management of the department as well as obtaining accreditation from the Southern Association of Colleges and Schools. He was assigned as liaison officer with the Naval Investigative Service in three investigations involving a drowning, a hit and run, and a bludgeoning. He was depended upon for locating witnesses, coordinating family arrangements, securing photographs and collecting other evidence.
Before serving as a Naval Officer and pilot, Captain Turner served as Chief Warrant Officer for the U.S. Army, 120th Assault Helicopter Company (AHC), Nha Be, South Vietnam and the 134th AHC, Tuy Hoa. Captain Turner flew UH-1 gunships in support of American, Korean and S. Vietnamese troops.
Captain Turner was born in Vinton, Iowa and attended public schools in Colorado, graduating from Durango High School and attending Colorado State University, Ft. Collins, Colorado. He entered active duty in December 1969 and received his Warrant and Army Flight wings in March 1971. He was later commissioned May 1975 through Naval Officer Flight Training, were he also received his Naval Flight wings. During his career, he has been involved in all aspects of fixed and rotor wing flying including numerous combat missions. He was a Distinguished Graduate of the Naval Flight Program and was awarded the Republic of Vietnam Gallantry Cross with star and Air Medal with 24 stars.
Captain Turner resigned from the Nebraska National Guard in April, 1984 after 10+ years of honorable service to become a Special Agent for the Federal Bureau of Investigation. He is married to the former Patricia Young of Niagara Falls, New York. He has two children: Dr. T. Scott Turner, MD (U.S. Military Academy, West Point, 1997, Iraq veteran); Timberly Turner Reisetter (U.S. Merchant Marine Academy, Kings Point, 2003, Iraq veteran & H60 pilot). 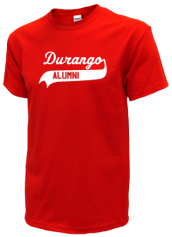 Read and submit stories about our classmates from Durango High School, post achievements and news about our alumni, and post photos of our fellow Demons.

I am attaching some information from Jerry Timm who was our class president in 1955. We were honored that year to win a ...
Read More »

View More or Post
Our Durango High School military alumni are some of the most outstanding people we know and this page recognizes them and everything they have done! Not everyone gets to come home for the holidays and we want our Durango High School Military to know that they are loved and appreciated. All of us in Durango are proud of our military alumni and want to thank them for risking their lives to protect our country!