Have you lost your Doherty High School class ring? Have you found someone's class ring? Visit our Spartans lost class ring page to search for your class ring or post information about a found ring.

Anthony Lee Craig
Class of 2008
Air Force, 8 Years
Currently been serving 8 years. Work backshop avionics on the AC- 130U. I am happily married and have 2 kids. Stationed at the beautiful Hurlburt Field in sunny Florida!
Report a Problem

Bob Singleton
Class of 1980
Air Force, 20+ Years
Began career as a B-52 navigator, went to pilot training, and have flown the A-10 since. Currently working at the Pentagon in International Affairs.
Report a Problem

Brandi Moser
Class of 2010
Navy, 4 Years
I served in the Navy for 4 1/2 years before being medically retired.
Report a Problem

Bryan Welding
Class of 1984
Army, 3 Years
Served as a Military Policeman from 1984-1987. Stationed for 2 years in Baumholder Germany and completed service time at Ft. Eustis Va.
Report a Problem

Charles Zarza
Class of 1997
Air Force, 5 Years
Aircraft maintenance on the U-2 Dragonlady, continuing to serve as a reservist
Report a Problem

Christopher Brooks
Class of 1976
Air Force, 20+ Years
28-year career as Weather Officer and Military Attache. Taught for 8.5 years at the Air Force Academy, and enjoyed overseas tours of duty in Guam, Egypt, Germany, and Burundi, as well as three Army support and two Navy support assignments. Was an active parachutist at ages of 28 and 42!
Report a Problem

Jacob C. Rigg
Class of 2004
Marine Corps, 6 Years
I am a aviation technician. I work on F/A-18
Report a Problem

Jeff Harvey
Class of 1980
Air Force, 20+ Years
Served in the Air Force as a Security Specialist for 6 years with tours at K.I. Sawyer AFB, Michigan and Wueschiem Air Station Germany. Crossed Trained into the Comamnd and Control career field and served in Korea, back home in Colorado Springs, Mcguire AFB, New Jersey, and two assignments at Scott AFB, Illionois. Served in both Iraq wars and prey for the safety of our current veterans in IRAQ.
Report a Problem

Jennifer Burkman Bingham
Class of 2001
Air Force, 10 Years
I am a Paralegal in the USAF and I am currently stationed at Travis AFB CA. I have been stationed in South Korea, the UAE, Kansas, Nevada, and California. My time in the AF has difficult but rewarding and I plan to stay in for another 10 years.
Report a Problem

Jennifer Calvin
Class of 1988
Air Force, 16 Years
Last I heard she was still in the Air Force stateside. She was in Germany for quite awhile.
Report a Problem

John Vandeburg
Class of 2003
Navy, 6 Years
Joined the Navy in early 2004, enlisting as an electronics technician. Has now served over 4 years on board USS Bulkeley after completing job training and his current enlistment runs until 2014.
Report a Problem 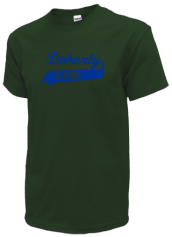 Read and submit stories about our classmates from Doherty High School, post achievements and news about our alumni, and post photos of our fellow Spartans.

This Week in SPARTA


View More or Post
Our Doherty High School military alumni are some of the most outstanding people we know and this page recognizes them and everything they have done! Not everyone gets to come home for the holidays and we want our Doherty High School Military to know that they are loved and appreciated. All of us in Colorado Springs are proud of our military alumni and want to thank them for risking their lives to protect our country!