Have you lost your Coloma High School class ring? Have you found someone's class ring? Visit our Comets lost class ring page to search for your class ring or post information about a found ring.

David Just
Class of 1997
Navy, 4 Years
I made 2 (almost 3) deployments. The first was straight to the Persian Gulf. Going through the "Line of Death," the Suez Canal and the Arctic Circle were highlights of that cruise. The second was a "Love Boat" tour of the Mediterranean Sea
Report a Problem

David Just
Class of 1987
Navy, 4 Years
I did 2 (almost 3) cruises. The first took me straight to the Persian Gulf. The second was a "Love Boat" tour of the Mediterranean Sea. I've been to Italy, Spain, France, Egypt, Israel and England. Oops, almost forgot...St. Thomas.
Report a Problem

Don G. Burleson
Class of 1970
Marine Corps, 2 Years
Received injuries in Vietnam that renderd me disable and retired in 1971 with full military rights.
Report a Problem

Douglas Saxton
Class of 1978
Navy, 20+ Years
Served for 20 years seen half of the world operation desert storm and desert shield. reside in CA
Report a Problem

George Meyers
Class of 1945
Army, 2 Years
WWII Asiatic Theater Ribbon, Victory Medal, Good Conduct Medal. Drafted to the Army in his senior year at CHS in 1944, George was awarded his HS diploma in 2002 for the class of 1945.
Report a Problem 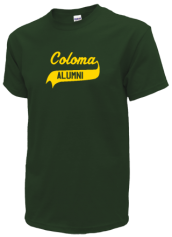 Read and submit stories about our classmates from Coloma High School, post achievements and news about our alumni, and post photos of our fellow Comets.

Post Your News
In Memory Of
Our Coloma High School military alumni are some of the most outstanding people we know and this page recognizes them and everything they have done! Not everyone gets to come home for the holidays and we want our Coloma High School Military to know that they are loved and appreciated. All of us in Coloma are proud of our military alumni and want to thank them for risking their lives to protect our country!