Have you lost your Coeur d'Alene High School class ring? Have you found someone's class ring? Visit our Vikings lost class ring page to search for your class ring or post information about a found ring.

Brenda Baker
Class of 1989
Navy, 18 Years
Currently a Nurse Corps Officier in the US Navy
Report a Problem

gary clark
Class of 1972
Air Force, 20+ Years
I was in supply-graphics and photography
Report a Problem

John Hough
Class of 1976
Navy, 6 Years
Operations Specialist on the USS Deyo Lant Flt Destroyer and also Spy Ship, worked with 1 of 2 seal teams on board and our Army Helo Detachment on board, Visited and did a lot of things in the early 80's mostly Central America, Africa and the Persian Gulf.
Report a Problem

Kellie K Jensen
Class of 1977
Army, 11 Years
Traveled the world while being the best 52C I could be. Left the Army as a Sergeant to raise my son in the best place on earth. Home!!
Report a Problem

Marilyn (Meyer) Fisher
Class of 1966
Army, 20+ Years
Served 4 years in the Navy as a Corpsman during Vietnam - then on to Army in 1983 and retired as LtCol in the Army Nurse Corps in 2007.
Report a Problem

Marion Richardson
Class of 1971
Army, 1 Years
German Interpreter. Medically Discharged due to injuries suffered while on duty.
Report a Problem 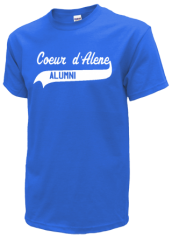 Read and submit stories about our classmates from Coeur d'Alene High School, post achievements and news about our alumni, and post photos of our fellow Vikings.