Have you lost your Coconino High School class ring? Have you found someone's class ring? Visit our Panthers lost class ring page to search for your class ring or post information about a found ring.

Blaine Evans
Class of 1982
Navy, 5 Years
I served during the fist gulf war. Also did two medateranian tours. I also am the Plank owner of the USS Vella Gulf CG72
Report a Problem

Chris Reid
Class of 1996
Air Force, 6 Years
2 Deployments to Afghanistan and 1 to Al-Udeid as Ground Radar Technician
Report a Problem

David Hawthorne
Class of 1975
Marine Corps, 4 Years
Actually, I joined in nov. 1974 and was trained as a field diesel mechanic and was assigned to 2nd. battalion 9th. Marines as logistic support during evacuation of Cambodia. Served on various naval vessels and got to see alot of the pacific. Spent a couple of years with the National Guard while I attended N.A.U.
Report a Problem

Deanna Szopinski
Class of 1987
Navy, 16 Years
I loved the service! If I could have gone the full 20 would have. I have almost 6 active and 10 years reserve. Very proud of my service and anyone else that serves.
Report a Problem

Derek Curiel
Class of 2001
Army, 4 Years
Derek is on his second tour of duty in Iraq, he left his wife & two sons in Texas. Please pray for his safe return home for him and all military.
Michelle (Sis)

Karen Sue Ernst
Class of 1976
Navy, 2 Years
Seaman apprentice, worked on a Tugboat and in the Boatmans office as well as the Warrent Officers office
Report a Problem

Mark Ives
Class of 1977
Army, 13 Years
Served as a Pershing Missile Crewman for 5 years and Intelligence Analyst for 8 years. Served in West Germany for 8 years, ending in West Berlin during the Cold War. Was a Staff Sergeant.
Report a Problem

Moises R. Gonzales
Class of 1984
Army, 20+ Years
Preparing for his thrid deployment to Iraq. He leaves behind his wife and 3 sons. (1 son is in Iraq)
Report a Problem 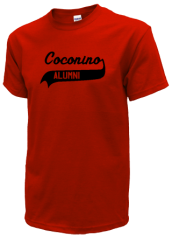 Read and submit stories about our classmates from Coconino High School, post achievements and news about our alumni, and post photos of our fellow Panthers.

Safford took the 3 A championship this year in 5 weight classes, including heavy weight. Not a bad deal so to speak. But...
Read More »

View More or Post
Our Coconino High School military alumni are some of the most outstanding people we know and this page recognizes them and everything they have done! Not everyone gets to come home for the holidays and we want our Coconino High School Military to know that they are loved and appreciated. All of us in Flagstaff are proud of our military alumni and want to thank them for risking their lives to protect our country!