Have you lost your Caro High School class ring? Have you found someone's class ring? Visit our Tigers lost class ring page to search for your class ring or post information about a found ring.

Angelique Lynn Nostrant, Caro, Passed away Tuesday, Aug. 23, 2005 at Henry Ford Hospital in Detroit, at the age of 32. Angie was born Aug. 27, 1972 in Caro, the daughter of Kenneth and Karen (Langworthy) Nostrant, and grew up in Deford. She graduated from Caro High School in 1990 and was attending Delta College to pursue a degree in criminal justice. She had been employed with AllState Insurance Agency in the Caro office for 14 years and at the MARC Health Club for about eight years as a certified personal trainer who also taught group fitness classes. Angie was an active equestrian, a two-time marathon runner and loved being around animals. Surviving are her daughter, Bryanna Chelsea Clark of Caro; mother, Karen Markel of Lowell; father, Kenneth Nostrant of Deford; one brother, Geoffrey Wayne Nostrant of Seoul, South Korea; her best friend, ex-husband, Brian Clark of Caro; maternal grandmother, Goldie Langworthy of Caro; paternal grandmother, Anna Maydak of Grosse Isle; three step-brothers; many cousins and friends. Funeral service will take place at the Ransford Funeral Home in Caro at 11 a.m. Tuesday, Aug. 30 with Steven Harduk of the First Baptist Church of Alto officiating. Burial will follow in Indianfields Twp. Cemetery. Friends may call at the Ransford Funeral Home in Caro on Monday, Aug. 29 from 3-5 p.m. and 6-8 p.m. and Tuesday from 10 a.m. until the time of the service at 11 a.m. Memorials may be made to a trust being set up for Angie’s daughter, Bryanna Chelsea Clark. Tuscola County Advertiser 8-27-2005

BRADLEY S. CORL
Mayville
Died Friday, Oct. 16, 2009 at Covenant Health Care of Saginaw, at the age of 38. Brad was born June 4, 1971 to Jerry and Jeanette (LaSota) Corl in Lapeer and was a Caro High School graduate in 1990. He had resided in Mayville while being employed at Hoppâ€™s Lumber for 17 years. Brad also helped with the concession wagon and at the floral shop. Brad married Kimberlee Wingert Sept. 11, 2004 in Mayville. He enjoyed tractors, working in his yard, hunting and recently joined the Thumb Area Antique Tractor Assoc. He is survived by his wife Kimberlee; twin daughters, Nickee Janie and Emilee Jean; brother, James (Teresita) Corl of Las Vegas, NV; father, Jerry (Karon) Corl of Caro and many uncles, aunts, nieces and nephews. He was preceded in death by mother, Jeanette in 2006; grandfather, Nicholas LaSota and grandparents, Howard and Lottie Corl. Funeral service was at 11 a.m. Monday, Oct. 19 at Avram Funeral Home in Mayville with Terry Blackmer officiating. Interment was in Fremont Township Cemetery. Memorials may be made to the Family Discretionary Fund. Avram Funeral Home of Mayville assisted the family with the arrangements. Friends may share an online condolence at www.avramfuneralhome.com.

Forever in our memories
Class of 1982
(Passed date unknown)

As the CHS class of 1982 prepares to reunite after twenty~five years we are full of memories of old friends and want the families and friends of these individuals to know that their loved ones are not forgotten by us either.


"To the living they are gone. To the sorrowful, they will never return. To the angry, they were cheated. But to the happy, they are at peace, and to the faithful, they have never left. They can not be see, but they can be heard. So as you stand upon a shore, gazing at a beautiful sea, remember them. As you look at a mighty forest and it's grand majesty, remember them. As you look upon a flower and admire it's simplicity, remember them. Remember them in our hearts, thoughts, and our memories of the times we shared, the times we laughed, the times we sang. For if we always think of them, they will never have gone." unknown author

Jesse was born on September 7, 1979. He was a 1997 Caro High School graduate and attended Saginaw Valley State University. Jesse was employed as a computer specialist at Wiley Products in Mayville where he worked in Wal-Mart locating. He enjoyed computers and the out doors. He was a member of The Caro Church of Christ.

He is survived by his wife Amanda, daughter Cierra, his parents and his siblings.
He was preceded in death by his grandmother, Elisabeth Lee.

Jesse passed away on March 17,2002, at Caro Community Hospital.

THOMAS B. ROAT
Davisburg, formerly of Caro
Passed away on Thursday, Feb. 25, 2010 at Genesys Health Care in Grand Blanc, at the age of 39. He was born on June 7, 1970 in Caro to the late Bernard and Velma (Grace) Roat. Tom was a 1989 graduate of Caro High School, and then attended Davenport University, majoring in Business. He was employed by AVI Foodsystems as a general manager at Wayne State University. Tom loved dogs, Pookie and Aspen, and doted on them. He enjoyed people and spending time on Facebook, playing games on the computer, Nintendo Wii and gardening. Family was extremely important to Tom, and he became president of the Grace Reunion. He was becoming very involved in cancer-related activities. He is survived by his life partner, Jason Dupras of Davisburg; his siblings, Gary (Laura) Anderson of Caro, Mike (Jennifer) Anderson of Fairgrove, Sandy Ewald of Caro, Rodney Anderson of Texas, Rick (Linda) Roat of Burton, Teresa (Rodney) Brown of Caro and Scott (Marianne) Roat of Burton; three aunts, Marion Noell of Burton, Lillian (Dale) Nelson of Burton and Barbara Miller of Florida; Tomâ€™s second family, the Dupras family and several nieces, nephews and cousins. In addition to his parents, he was preceded in death by the remainder of his siblings. Funeral service will be held at Collon Funeral Home in Caro on Monday, March 1 at 1 p.m. with Chris Taylor facilitating. Cremation will follow the service. Visitation will be held at Collon Funeral Home on Monday, March 1 from 10 a.m. until time of service at 1 p.m. Memorials may be made to the Thomas B. Roat family discretionary fund, c/o Teresa Brown, 302 S. State St., Caro, MI 48723. Feel free to share your thoughts, memories and prayers with the family at www.collonfuneralhome.com. 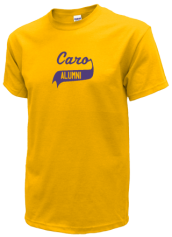 Read and submit stories about our classmates from Caro High School, post achievements and news about our alumni, and post photos of our fellow Tigers.