Have you lost your Calvert High School class ring? Have you found someone's class ring? Visit our Cavaliers lost class ring page to search for your class ring or post information about a found ring.

David passed in a tragic motor vehicle accident on his way to CSM in May 2010. He is remembered as a loyal friend, gifted in mechanical engineering and a wonderful son. We will remember him in our hearts and prayers.

Pete left us on Apri 28,l 2007. He left behind a brother and sister, his mother and stepfather, and many friends who have never had anything bad to say about the guy.

Samuel Ray Gross was a former fashion model and actor. During his military career, he faithfully served his country as a deep-water search and rescue swimmer and diver for the United States Navy. After his honorable discharge, Sam earned his B.S. in Business Administration from the University of South Florida while continuing to pursue a career in the field of acting. Samuel was well on his way to earning his membership in the prestigious Screen Actors Guild when fate met with, then reversed the course of his fortune. At the age of 28, Sam was unexpectedly diagnosed with Ewing’s Sarcoma, an extremely rare pediatric cancer. Nearly four years later, on October 28, 2006, Samuel passed away from this non-discriminatory, unforgiving disease. Sam left behind his devoted wife, Carla, beloved father, Kenny, mother, Lenoir, sister, Kathleen, and a host of family and friends. We all miss you, Sam, and know, without a doubt, you made it to "the other side."

Brad passed away of Sudden Cardiac Arrest at age 29. He left behind a wife, Kim Shifflett, 2 sons, Donovin & Griffin and a step-son, Brandon.

Brad was extremely loved by all who knew him and now he is extremely missed.

A non-profit organization called the Kingfish Foundation, was formed by 2 friends (Calvert Alumni) to honor his memory. 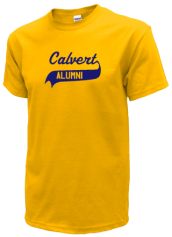 Read and submit stories about our classmates from Calvert High School, post achievements and news about our alumni, and post photos of our fellow Cavaliers.

Hi Everyone,
Hope all of you have been in good health and enjoying our Golden Years.
On Sunday, March 24, ...
Read More »