Have you lost your Brick Township High School class ring? Have you found someone's class ring? Visit our Dragons lost class ring page to search for your class ring or post information about a found ring.

Edward T. Herbert
Class of 1980
Navy, 4 Years
Basic Glakes Company Company 352, Hospital Corps School Class 83017, ORT NavHospBeth left the Program to do Critical Care Transport/Emergency Room at NNMC 1984, and then went to FMSS Camp Johnson, NC, and was then Stationed at Camp Lejuene with 3rd Battalion, 2nd Marines Kilo Company, and remained with 3/2 until the last Month or so before my Discharge where I did Sick Call at the 2nd Regimental Aid Station for my Short Time until I went home. Three Days later I was working for SAS Ambulance in Lakewood.
Report a Problem

Frederick Cowdrey Langille, Jr.
Class of 1966
Army, 20+ Years
Vietnam era and Cold War veteran of both the Coast Guard and the Army with over 35 years creditable service as a captain in the Adjutant General Corps. Only American soldier recognized as an instructor in the German Army for their expert infatnry badge. Weapons expert, public affairs officer and, former infantryman as well as honorary parachutist for Canada and Israel.
Report a Problem

James P. Mullin
Class of 1973
Marine Corps, 20+ Years
United States Marine Corps from June of 1973 until June of 1977. Served as an Aviation Supply Clerk and was honorably discharged as a Sergeant, E-5.

In February of 1984, after realizing that Registered Nurses didn't get pain very well, I reenlisted in the United States Navy as a Hospital Corpsman, HM2/E-5. I retired after 22+ total years of service in July of 2002. I attained the rank of Chief (Independant Duty) Hospital Corpsman, HMC/E-7.

During my years in the Navy, I served with several Marine Corps Infanty Battalions as a Field Medical Service Technician. I was the Medical Department Representative on independant duty (no doctor) aboard the USS LAKE CHAMPLAIN (CG-57). I served at two major Naval Medical Centers (NNMC/NMCSD). And finally, I served on the staff as an instructor at one of the Navy's Survival (SERE) Schools.

Paul W. O'Finan
Class of 1975
Marine Corps, 20+ Years
Paul served in the Marine Corps from 1981 through 2002. Paul attended Officer Candidates School in Quantico, Virginia and upon graduation attend the Marine Corps Basic School also located in Quantico. Paul was first assigned to "C" (Charlie) Company, Third Assault Amphibian Battalion, 1st Marine Division at Camp Pendleton, California where he served as a Platoon Leader, Company Executive Officer and as Company Commander. Paul traveled extensively with the Marines to places like Panama, Korea, Japan, Okinawa, Norway and served in Operation Desert Storm. Paul was crossed trained in Motor Transport and Logistics and served on the staff of the Commanding General of the 4th Marine Force Service Support Group that provided logistical support to the 4th Marine Division and the 4th Marine Air Wing. Living above the Arctic Circle in Winter and in the Mojave Desert in the Summer are two extremes that allowed him to fully appreciate the beauty and comfort of Ocean County Spring weather.
Report a Problem

Victor J Perry
Class of 1996
Navy, 10 Years
I was injured in Iraq in 2004 and was medically retired in 2010. I did 1 tour n the ground and on deployment to support the war.
Report a Problem

William Gray
Class of 2001
Navy, 5 Years
Served 5 years in the US Navy, 4 years on the USS Peleliu stationed out of San Diego.
Report a Problem 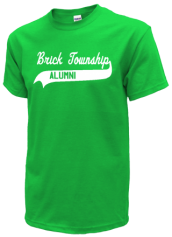 Read and submit stories about our classmates from Brick Township High School, post achievements and news about our alumni, and post photos of our fellow Dragons.

Michael Grembowicz, class of 1980 passed away on Sunday, November 25th. He died of pneumonia in a California hospital ne...
Read More »

View More or Post
In Memory Of
Our Brick Township High School military alumni are some of the most outstanding people we know and this page recognizes them and everything they have done! Not everyone gets to come home for the holidays and we want our Brick Township High School Military to know that they are loved and appreciated. All of us in Brick are proud of our military alumni and want to thank them for risking their lives to protect our country!