Have you lost your Boyd County High School class ring? Have you found someone's class ring? Visit our Lions lost class ring page to search for your class ring or post information about a found ring.

Lynn Newsome Hughes, 41, of Richmond, Ky., formerly of Ashland, went home to be with the Lord on Friday, Dec. 8, 2006, in St. Joseph Hospital in Lexington, Ky., surrounded by her loving family following an extended illness.


Mrs. Hughes was born Nov. 29, 1965, in Ashland, Ky., a daughter of David and Judith May Newsome. She was a hairstylist and employed by Ashland Inc. She was a member of White Hall Baptist Church in Richmond.


In addition to her parents, she is survived by her husband, Timothy Joe Hughes; a son, Hunter Drake Hughes at home; two brothers, David Michael Newsome and wife Debbie of Catlettsburg, Ky., and Jeffrey Newsome and wife Kathy of Ashland; her maternal grandmother, Carma May of Ashland; her mother-in-law, Anna Hughes of Garrison, Ky.; and a special niece and nephews, Shane, Chris, Jacob and Kayla Newsome.


Funeral services will be at 1 p.m. Wednesday, Dec. 13, 2006, at Marshall Steen Funeral Home in Ashland by the Rev. Tim Beard. Entombment will be in Rose Hill Burial Park Mausoleum.

Michael was born Jan. 18, 1965, in Ashland, a son of Patricia Newman Tussey of Catlettsburg and the late Harry Lee Tussey. Michael worked as a pipefitter with Pipefitters Local 748 in Durham, N.C.

Funeral services will be at 1 p.m. Friday, Dec. 28, 2007, at Caniff Funeral Home in Westwood by the Rev. Charles Stewart. Burial will be in Rose Hill Burial Park in Ashland.

David struggled with the chronic effects of diabetes for many years. Had a pancreas and kidney transplant. David was energetic and while in school played "anything with a ball"--football, basketball, baseball. Finally moved to Florida and ended life as a Christian. Farewell to a good buddy.

Mark was a friend since birth. Both of our parents went to school with each other. We attended our Senior Prom together and had the time of our lives. I was fortunate to see Mark one last time before he passed away in 1995.

Shawn E. Hamilton, 43, of Rush, Ky., passed away Wednesday evening, July 30, 2008, in King’s Daughters Medical Center. He was born Oct. 30, 1964, in Ashland, Ky., a son of Raymond Jr. and Phyllis Bradshaw Hamilton of Rush. In addition to his parents, he is survived by two brothers, Gary Hamilton of Huntington, W.Va., and Joey Hamilton of Ashland; a special little niece, Jessica McFadden of Ashland; and a host of aunts, uncles and cousins who mourn his passing. Funeral services will be at 2 p.m. Monday, Aug. 4, 2008, at Malone Funeral Home in Grayson. Burial will be in Old Grayson Cemetery. Visitation will be after 11 a.m. Monday at the funeral home. Condolences may be made to www.malonefuneralhome.com.

Tim struggled with physical problems for several years but remained cheerful and hopeful of medical intervention. She is remembered as an avid horsewoman, friend, and had a beautiful smile to encourage each of her friends. 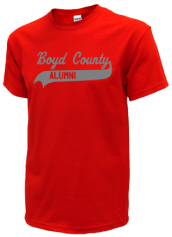 Read and submit stories about our classmates from Boyd County High School, post achievements and news about our alumni, and post photos of our fellow Lions.