Have you lost your Atascadero High School class ring? Have you found someone's class ring? Visit our Greyhounds lost class ring page to search for your class ring or post information about a found ring.

Calvin Clark
Class of 1960
Air Force, 4 Years
I enlisted in the US Air Force on March 12, 1961. I attended tech school at Chanute AFB in Illinois where I was trained to maintain the large 4 jet engine B52 Bomber. I was promoted to up thru the enlisted ranks to A1C in just 24 months and I was honorably discharged on March 14, 1965.

It is funny but I never worked on a B52 after I finished Tech School. Instead, I spend 3-1/2 years at Dover Air Force Base in Delaware. At Dover I was assigned to the maintenance crew for the C133A aircraft fleet which consisted of 30 aircraft. Each aircraft had a maintenance crew of 14 airmen. The C133A was the largest cargo aircraft the Air Force had at that time. Those that are still around are in military aircraft museums all around the world..

Douglas Oglesby
Class of 1960
Navy, 10 Years
I served in the US Navy from 1964-68 as a line officer on a guided missile destroyer and a guided missile frigate, including three deployments to Vietnam. I attended law school from 1968-71 while on active duty, and served in the Judge Advocate's General Corps from 1971 - 1974, mostly as a prosecutor. I resigned in 1974 to enter private practice.
Report a Problem

Elden Ables
Class of 1960
Air Force, 4 Years
I attended electronics school in Biloxi Mississippi and was assigned as ground radar repairman on the early warning system for the rest of my term in the Air Force. It was a stepping stone for obtaining an engineering degree after my tour of duty.
Report a Problem

Mike Gobbell
Class of 1986
Navy, 6 Years
Aviation Ordnanceman assigned to VFA-303. Went on 3 cruises including a World cruise, a Med. cruise, and a East Pack cruise. In 1989 was on board the U.S.S. John F. Kennedy when we shot down the 2 Libyan MIG's and served in Operation Desert Sheild and Storm.
Report a Problem

Robert Strickland
Class of 1984
Navy, 20+ Years
EMCS (SW/AW) 1984 - 2007 retired. Never thought I would make it a career. Had great time. Been place I would have never seen on my own. Glade to be back on the central coast
Report a Problem 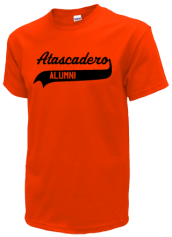 Read and submit stories about our classmates from Atascadero High School, post achievements and news about our alumni, and post photos of our fellow Greyhounds.

Post Your News
Our Atascadero High School military alumni are some of the most outstanding people we know and this page recognizes them and everything they have done! Not everyone gets to come home for the holidays and we want our Atascadero High School Military to know that they are loved and appreciated. All of us in Atascadero are proud of our military alumni and want to thank them for risking their lives to protect our country!