Have you lost your Andover High School class ring? Have you found someone's class ring? Visit our Trojans lost class ring page to search for your class ring or post information about a found ring.

Brad Thimmesch
Class of 2006
Army, 1 Years
Brad is currently in the Army Infantry and based out of Savannah, GA
Report a Problem

Bryant Culp
Class of 2013
Navy, 2 Years
Currently serving aboard a Nimitz class aircraft carrier based out of the east coast. One deployment so far to the middle east in support of Operation Enduring Freedom. Always proud to serve.
Report a Problem

Don Johnson
Class of 1969
Navy, 20+ Years
I was a Navy radioman for 10 1/2 years and then received a commission as a limited duty officer and served until January 1992. I am a Vietnam Veteran and a Persian Gulf War Veteran. I was assigned to five different ships over the 22 years and to four different shore duty stations. I received my Associate of Science in Electronics Technology from Gavilan College in 1983 and my Bachelor of Arts in Social Science from Chapman University in 1989. Both were completed while on active duty.
Report a Problem

Jennifer Wasson
Class of 1999
Army, 8 Years
My job in the service was Chemical Operations Specialist. I joined right after high school and loved every minute of it. I traveled to El Salvador and to a few other places in the states.
Report a Problem

Robert Charles Scott
Class of 1992
Navy, 8 Years
Was a Petty Officer in the United States Navy. Worked as a Yeoman in Norfolk, VA and Coronado CA. Four month Deployment in the Persian Gulf in 2005.
Report a Problem

Tracie (Rohr) Hahn
Class of 1997
National Guard, 9 Years
I was a heavy equipment operator for a construction unit in Augusta. I really enjoyed the time spent in the service, even the fabulous trip to Iraq. Thanks to everyone else who has served our country.
Report a Problem

William "Luke" Hantla
Class of 2009
Air Force, 2 Years
I am currently a 2d Lt who commissioned from your United States Air Force Academy, Class of 2013. I graduated pilot training from Vance AFB, Oklahoma. I will be flying the C-17 at Hickam AFB, Hawaii.
Report a Problem 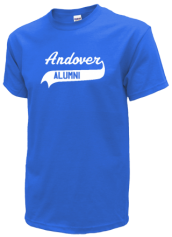 Read and submit stories about our classmates from Andover High School, post achievements and news about our alumni, and post photos of our fellow Trojans.

Hi Robert,
I seem to remember some pictures of the old building included with the old class pictures on those big...
Read More »

View More or Post
In Memory Of
Our Andover High School military alumni are some of the most outstanding people we know and this page recognizes them and everything they have done! Not everyone gets to come home for the holidays and we want our Andover High School Military to know that they are loved and appreciated. All of us in Andover are proud of our military alumni and want to thank them for risking their lives to protect our country!