Have you lost your Adams City High School class ring? Have you found someone's class ring? Visit our Eagles lost class ring page to search for your class ring or post information about a found ring.

Charles W. Stansburge
Class of 1965
Marine Corps, 9 Years
Went to San Diego Boot camp, then Okinawa and Nam then stationed in Camp Pendleton then to Cuba and back to Pendleton got out. Then returned for reserve was a Motor transport then change to a Anti-tank Gun unit and got out after a another 3 yrs..
I was very proud to serve and would do it again.

Dennis Wolking
Class of 1966
Air Force, 4 Years
Thank you Dennis for serving our country during the Vietnam era. We are so proud of you.
Report a Problem

Jerry Granberg
Class of 1964
Army, 2 Years
Vietnam combat veteran
Served 9/69 to 7/70 with 2/32 Field Artillery
Tay Ninh Province
Supported the Cambodian Incursion and spent late May and June of 1970 in Cambodia at FSB Oklahoma in the Fishhook Region.
Ran into Bobby Mathews (ACHS 1964) at FSB Lanyard in July,1970.

Most memorable moment: Flying in the rear seat of an F-16B... what an incredible machine!! 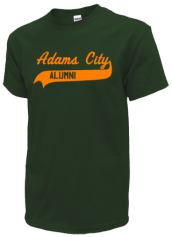 Read and submit stories about our classmates from Adams City High School, post achievements and news about our alumni, and post photos of our fellow Eagles.

View More or Post
In Memory Of
Our Adams City High School military alumni are some of the most outstanding people we know and this page recognizes them and everything they have done! Not everyone gets to come home for the holidays and we want our Adams City High School Military to know that they are loved and appreciated. All of us in Commerce City are proud of our military alumni and want to thank them for risking their lives to protect our country!