OZARK (KFSM) – A 1982 Van Buren class ring was found lodged in an engine by an employee who works for Slimrock – Cedar Ridge Quarries in Ozark.

The employee brought their 1988 Ford Ranger to work and said he had just bought the truck. He started working on the engine and found a 1982 Van Buren High School men’s class ring lodged in the motor.

The initials “DEN” are engraved on the inside of the ring.

No one at the quarry knows who owns the ring, but the person who found the ring said it must have been lodged in the motor for years. The ring was lodged so tight that it could not move around inside the engine.

The person who found it also said the ring has no wear on it at all, possibly indicating that it wasn’t worn long before it was lost.

If anyone knows the owner of the ring, they are encouraged to call Karen Stephens at 479-667-2121 to help reunite the ring with its owner.

Silver class ring with a clear jewel open bible inside ... not sure what all was on the sides but I think it had my name on it... Kathren Carter. Also says VBHS On it # 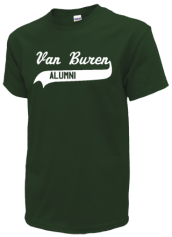 On Saturday, June 12, 2010 there will be a Memorial Event at the Arkansas Fallen Hero's Memorial in Fayetteville, Arkans...
Read More »