Have you lost your Omak High School class ring? Have you found someone's class ring? Visit our Pioneers lost class ring page to search for your class ring or post information about a found ring.

STEVEN SCOTT MORRISON
Class of 1989
Army, 17 Years
SCOTT MORRISON SERVED IN THE US ARMY FROM 14 MARCH 1990 TO OCTOBER 15 2007 WHEN HE WAS RETIRED FROM SERVICE. HE HAS BEEN STATIONED IN NUMEROUS OVERSEAS LOCATIONS INCLUDING THIALAND, KOREA, CENTRAL AMERICA, AND HAITI. HE HAS ALSO BEEN STATIONED IN TEXAS, VIRGINIA, LOUISIANA AND ALASKA. HE CURRENTLY RESIDES IN ARKANSAS WITH HIS WIFE OF 15 YEARS.
Report a Problem

YNC Joshua Braarud
Class of 1989
Coast Guard, 18 Years
Chief Braarud served in the US Army from June 1989 to January 1994. He joined the US Coast Guard in 1994 and has served on board the cutters ACTIVE and ALERT, and at Air Station Cape Cod, Group Woods Hole, and the First District in Boston.
Report a Problem
12 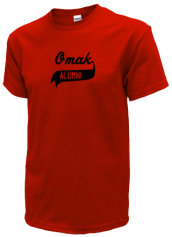 Read and submit stories about our classmates from Omak High School, post achievements and news about our alumni, and post photos of our fellow Pioneers.

View More or Post
In Memory Of
Our Omak High School military alumni are some of the most outstanding people we know and this page recognizes them and everything they have done! Not everyone gets to come home for the holidays and we want our Omak High School Military to know that they are loved and appreciated. All of us in Omak are proud of our military alumni and want to thank them for risking their lives to protect our country!