Northside's Class of 2003 has launched it's official class website.

The website was designed to be a centralized place for everything pertaining to keeping up with what is going with the Class of 2003 including reunion details and updating classmate profiles.

Visit the Class of 2003's new website at: www.tinyurl.com/NorthsideHigh2003

Noirthside history will soon be made as the NHS Class of 2003 will hold their Reunion on October 18-19, 2013 during Homecoming Week-End.

More info and a class website will be ready in early January.

Although NHS opened for the 2001-2002 school year, there was no Senior Class.

This will be the first-ever Class Reunion for the Monarchs!

Beginning April 9, 2010, requests for school "graduate" records will be requested through an online management system (see below).

Graduate transcript requests can now be requested online. If you graduated from an Onslow County School, click the link https://onslowk12.singularitysp.com/foldreq/request.html to start the process.

Phone or fax requests will no longer be accepted.

The following fees will apply:

If the student did not graduate from an Onslow County School, the student will need to contact the last school attended.

Exception: All school records from Georgetown are maintained by this department.

To comply with recently enacted Senate Bill 202/S.L. 2009-451, the North Carolina Department of Public Instruction eliminated the Competency Tests in Reading and Mathematics and the Computer Skills Tests and their alternate assessments. The change was effective July 1, 2009.

Because there are students in North Carolina who completed all other high school graduation requirements since 1981, but failed to meet the competency and/or computer skills proficiency standards established for those assessments, NCDPI has directed that those students may petition their former high school to receive a regular high school diploma.

New diplomas will be issued in June of each year until 2014.

Students who believe they are qualified under the revised graduation policy must present their original high school Certificate of Achievement to the current principal of the high school from which they received their certificate." This information will be forwarded to the Secondary Director for purposes of system wide record keeping and state reporting. All requests must be submitted prior to July 1, 2014.

Former students who believe they are qualified under the revised policy, but are unable to present their original high school Certificate of Achievement will be required to present evidence, such as official school transcripts, that document that all state and local board requirements for graduation were p

The words, said more than once, described what students, colleagues and friends wanted the world to know about the life of Albert James.

The Jacksonville native and Northside High School principal died Saturday from cancer. A Thursday memorial service was held at the school where James had been principal since 2004.

Michael Cannon, a recent graduate of Northside High, spoke at the memorial and said James led by example.

Cannon spoke about the significant impact James has had on his life, his philosophies and the legacy he left behind as a leader, principal and friend.

"Our divine purpose while we are on this earth - it's not about how long you live, it's what you do while you live," he said.

Having had James as principal in high school and middle school, Jessica Mack, a senior at Northside High, said he played a key role in keeping her in school. She said he gave her guidance and good advice after she learned she was pregnant.

"I would go and see him a lot, especially last year - he kept me out of a lot of trouble," she said. "I had a child while I was in high school and he made sure I stayed on top of everything. I will miss just talking to him."

Several students said they will never forget how k

Mr Albert James, NHS Principal since 2004, passed away on Saturday evening, January 16, 2010 after a heroic battle with cancer. 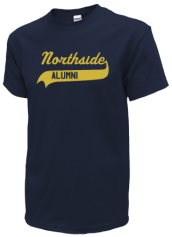 Read and submit stories about our classmates from Northside High School, post achievements and news about our alumni, and post photos of our fellow Monarchs.

Posting your Northside High School news is easy! Enter the title for your article and all the details that explain what is happening. Please refrain from posting reunion information on this page.