Harriet Behm Prochaska (nicknamed "Red Head" in school) , class of 1929, will be turning 100 years old this July!!! She attended the reunion at the school a few years ago and was featured on the eveining news! She still has her "Junebug" yearbook, as well as her diploma, announcement, and the ticket she sent to her future husband, Dr. Charles J Prochaska, to attend her graduation,.

She married Charles, and moved around the country during the war years, as he was an officer in the Army/Air Force. They had 6 children and lived in Lyndhurst until Harriet moved to Stone Gardens Assisted Living in Beachwood, OH last year. She boasts 10 grandchildren and 9 great grandchildren.

Harriet golfed well into her 90's, and also enjoyed bowling, needlecrafts, and collecting antiques and dolls. She painted and made ceramics, sewed and was a constant winner in the Antique Building at the Cuyahoga Co. Fair every year. She also did volunteer work at the old St. Anne's Hospital as well as Hillcest Hospital, where her husband practiced, as a Women's Axuilliary member for many years. 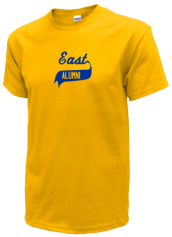 Read and submit stories about our classmates from East High School, post achievements and news about our alumni, and post photos of our fellow Bombers.

Alumni Stories »
The 2015-2016 school year is in full swing at East High School! The holidays are here along with all of the Bombers school events that come with them. Help keep your fellow East High School alumni informed of events in the community, fundraisers, new staff, grants, sports, safety classes, PTA events and more! Post your East High School school news here and give your fellow Bombers something to read about!

Posting your East High School news is easy! Enter the title for your article and all the details that explain what is happening. Please refrain from posting reunion information on this page.