Have you lost your Thompson High School class ring? Have you found someone's class ring? Visit our Warriors lost class ring page to search for your class ring or post information about a found ring.

Allan Garrett
Class of 1978
Navy, 20+ Years
Signed on for delayed entry before starting senior year and after sleeping through most of my classes due to working all night, I left for boot camp on July 7th, 1978.
Orlando Florida in the summer was NOT the best place to be but after finishing basic training I went on for school in Memphis where the weather was better but the humidity sucked.
First duty station request was "Anywhere California" and the detailer gladly obliged and placed me on the USS Ranger (CV-61) out of San Diego for three years of underway time.
Visited dozens of foreign ports from Japan to Australia. Good thing I took hundreds of pictures, otherwise I doubt I would remember much through the alcohol-induced fog of liberty.
Shore duty found me doing a tour as an instructor for electronic equipment troubleshooting and repair. It was here that I discovered an ability I never thought I would have: the knack for standing in front of a group of strangers and actually speaking coherently and cogently about any subject. This led me toward a Bachelor's degree in Workforce Education and Development with an emphasis in vocational teaching. Also started a family around this time enjoying the sleepless nights with my daughter as she grew into a young lady.
Back to sea duty where I returned to many of the same places as before, but this time with less drinking and more sight-seeing.
Shore duty back in San Diego, sea duty again, and finally shore duty for the final tour where I retired as a Chief Petty Officer (E-7).
Outstanding memories, lifelong friends. Wouldn't trade it for anything.

Brian Marcus
Class of 1994
Army, 10 Years
Proud to have served.
Report a Problem

Donald Mitchell McKnight
Class of 1983
Navy, 20+ Years
According to his dad, Donald Sr., Donald Jr. just retired and is currently living in San Diego, CA. He plans to visit family in AL in March.
Report a Problem

Robert Anthony Moore
Class of 1983
Navy, 6 Years
Serving on Active Duty as a US Navy Chaplain.
I am not a hero but I serve every day with heroes!
Wanted you all to see a side of the war that you will not see on CNN.
In His Service,
Tony

Todd Ingram
Class of 1984
National Guard, 20+ Years
US Marines, Army and National Guard over 24 years of service.
Report a Problem 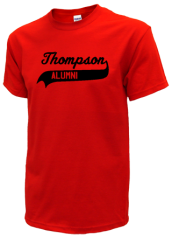 Read and submit stories about our classmates from Thompson High School, post achievements and news about our alumni, and post photos of our fellow Warriors.

Post Your News
In Memory Of
Our Thompson High School military alumni are some of the most outstanding people we know and this page recognizes them and everything they have done! Not everyone gets to come home for the holidays and we want our Thompson High School Military to know that they are loved and appreciated. All of us in Alabaster are proud of our military alumni and want to thank them for risking their lives to protect our country!