Have you lost your South Dade High School class ring? Have you found someone's class ring? Visit our Buccaneers lost class ring page to search for your class ring or post information about a found ring.

David K. Parks Jr.
Class of 1968
Air Force, 20+ Years
Stared off with F-4's and Advisor duty in Viet-Nam. Transitioned from flightline to Mobility and Planning. Member of several base honor guards, First Sgt in Shemy Alaska.
Report a Problem

David Parnell
Class of 1966
Army, 20+ Years
I enlisted one week after graduation. I served in the Army Security Agency in for locations stateside and then in Viet Nam with 1st Cav Div in 1968 and Korea in 1969-70 when I got out. I enlisted in the SC National Guard in 1976. I went to work full time with the Nationnal Guard serving as MP, Recuriter, Personnel SGT and then finally as a Chief Warrant Officer for a Combat Brigade. I retired with two days short of 35 years in Military.
Report a Problem

Eddie Caldwell
Class of 1975
Army, 20+ Years
Signed up as an Airborne Infrantry Soldier. Ended my Career in an Armored Tank Division inside of an M-1 Abrams Tank.
Report a Problem

Frank C Gentner
Class of 1962
Air Force, 23 Years
Lieutenant through Lieutenant Colonel, USAF 1968-1991. Served at Bien Hoa AB, Vietnam 1971-72. Served in Personnel, Safety, Social Actions, Occupational Analysis and career field restructuring, Insturctional Systems Development, Training Management, Acquisition, Human Systems Integration / Human Factors, and Scientific Manager. Served at Lackland, Bien Hoa, Kingsley Field, Randolph, Patrick, and Wright-Patterson AFBs. Performed acquisition analyses on C-17 to determine if women could fly the system as it was designed and F-22 maintenance training and manpower to reduce maintainers per aircraft from 24/25 on F-16 and F-15 down to 18.2 per aircraft as these aircraft were being designed and acquired.
Report a Problem

James Sampson
Class of 1979
Navy, 20+ Years
Joined the Navy in 1980 Recruit Training Command Orlando FL, Naval Training Command Great Lakes Il. Graduated as a Boiler Technician
Spent five years in CA serving on the USS Norton Sound AVM-1 research and development, then Hawaii for shore duty at SIMA repairing ships, served on USS Worden CG-18 sent back to CA, San Francisco area on the USS Mount Hood AE-29 back to Hawaii for shore duty at Submarine Squadron ONE, THREE and SEVEN, transfer to Submarine Support Command Hi as Master at Arms . Served in Operation Southern Watch 1992, Served in support of the task for off the coast of Mozambique 1993. Retired in 2000

John Harris
Class of 1974
Coast Guard, 20+ Years
Did my job. Retired... Wish I had of been a better friend to the class of 72 73 74. Found out over a long period of time that you all were great folks that got me through my hardest days by remembering how nice you were to me. Thanks; I should have tried to be a better student and friend to you all.
Report a Problem

Matthew Slater
Class of 2001
Air Force, 16 Years
C-130 Crew Chief. Fancy way of saying I maintain Air Craft. Been all over the world. Loving every minute of it.
Report a Problem 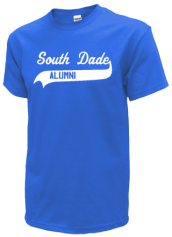 Read and submit stories about our classmates from South Dade High School, post achievements and news about our alumni, and post photos of our fellow Buccaneers.

Post Your News
In Memory Of
Our South Dade High School military alumni are some of the most outstanding people we know and this page recognizes them and everything they have done! Not everyone gets to come home for the holidays and we want our South Dade High School Military to know that they are loved and appreciated. All of us in Homestead are proud of our military alumni and want to thank them for risking their lives to protect our country!