Have you lost your North Union High School class ring? Have you found someone's class ring? Visit our Wildcats lost class ring page to search for your class ring or post information about a found ring.

Carolyn (Jamison) Gonzalez
Class of 1978
Army, 4 Years
Served 4 years as a Radio Teletype Operator with Morse Code qualifications. I served in Germany for two years and was then transferred to Fort Lewis, Washington.

I met my husband in Germany and got married in 1988. We have two handsome boys and twin grandaughters.

Carolyn (Jamison) Gonzalez
Class of 1978
Army, 4 Years
I served in the Army as a Radio Teletypewriter Operator with Morse Code Qualifications. I served 2 years in Frankfurt Germany and 1 1/2 years at Ft Lewis, Washington.
Report a Problem

Corey Amerine
Class of 1990
Army, 18 Years
I'm a Career Counselor in the Army. I've been to FT Devens, Ma, Germany, FT Riley, KS, Korea, and back to FT Riley. I'm currently soaking up the sun in lovely Iraq. Once I get back, I'll have a year and half left and I plan to retire with 20yrs in, and get me a regular job!!!!!! Go Wildcats, still love to throw the old pill around!!
Report a Problem

Heath Cox
Class of 1997
Army, 7 Years
I served 7 very long years in the Army first duty station was 101st Airborn Div Air Assault and in Germany with the 1 AD
I was shot during my second tour of Operation Iraq Freedom outside of Baghdad

Jeremy Samsel
Class of 1994
Army, 4 Years
Commo SGT, getting ready to switch to counter-intteligence. i've been to kosovo & now Iraq. i did 11yrs 8mos. in Ohio Nat'l Guard then switched to regular Army
Report a Problem 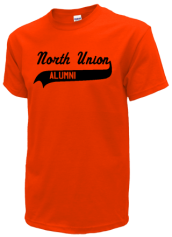 Read and submit stories about our classmates from North Union High School, post achievements and news about our alumni, and post photos of our fellow Wildcats.

View More or Post
In Memory Of
Our North Union High School military alumni are some of the most outstanding people we know and this page recognizes them and everything they have done! Not everyone gets to come home for the holidays and we want our North Union High School Military to know that they are loved and appreciated. All of us in Richwood are proud of our military alumni and want to thank them for risking their lives to protect our country!