Have you lost your Marine City High School class ring? Have you found someone's class ring? Visit our Mariners lost class ring page to search for your class ring or post information about a found ring.

Mark Kavalesky
Class of 1992
Navy, 16 Years
Enlisted a few months after graduation and have 16 years in as a Sonar Technician.
Report a Problem

Mark Reynolds
Class of 1977
Air Force, 20+ Years
Hi all,
I retired from the Air Force after 23 plus years of service. I traveled all around Europe and in different places across the US.

Marshall Magnan
Class of 1999
Navy, 7 Years
Currently an E-5 in the United States Navy. Headed back to Washington State for another tour on Submarines.
Report a Problem

Marshall S. Magnan
Class of 1999
Navy, 8 Years
SUBMARINES!!! Only way to go. Currently working in South Carolina for shore duty but heading back to Washington State for more sub-time.
Report a Problem

Michele Forton
Class of 1984
Army, 20+ Years
I have served in the Army since 1983. I am retiring a MSG in 2010. My service includes Reserve time as well as Active Duty time. I have served in Germany and Korea and have served during Desert Storm, The Gulf War, and the Iraq War.
Report a Problem

Penny Ravin
Class of 1975
Army, 4 Years
Stationed in Korea and then Schofield Barracks Ohau,HI. I was infantry communications support. I gaffed up telephone poles, ran lines, climbed towers and set the azmiths on the dishes. Loved being in and serving my country.
Report a Problem

Ralph Onesko
Class of 1997
Air Force, 9 Years
Currently serving in the Air Force going on 10 years in July. Just received an opportunity to serve overseas in CENTCOM bringing our wounded back home to the states.
Report a Problem

Robert S. Southard
Class of 1979
Navy, 20+ Years
Robert served in the Navy for 20 years as an Electronics Technician. He met his wife of 21 years while in the Navy. Robert's wife is currently still serving in the Navy and their son s a member of the Florida Army National Guard as an MP.
Report a Problem 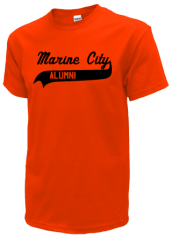 Read and submit stories about our classmates from Marine City High School, post achievements and news about our alumni, and post photos of our fellow Mariners.

We are a big band of local amateur musicians (10-15members) who love old tunes and have gathered together to reinvigorat...
Read More »

View More or Post
In Memory Of
Our Marine City High School military alumni are some of the most outstanding people we know and this page recognizes them and everything they have done! Not everyone gets to come home for the holidays and we want our Marine City High School Military to know that they are loved and appreciated. All of us in Marine City are proud of our military alumni and want to thank them for risking their lives to protect our country!