Have you lost your Greenville High School class ring? Have you found someone's class ring? Visit our Yellow Jackets lost class ring page to search for your class ring or post information about a found ring.

Andrew Russell
Class of 2004
Navy, 4 Years
I am an Aviation Electronics Technician on the P-3 Orion at NAS Whidbey Island in Oak Harbor, WA. My travels have taken me to Guam Hawaii, Okinawa, Tokyo, and Qatar.
Report a Problem

Carl E. Dhaene
Class of 2005
Army, 4 Years
TRAVEL GUIDE AND GAURD IN GERMANY FOR THE TROOPS IN AFGANISTAN
Report a Problem

Doug Bauman
Class of 2001
Navy, 8 Years
Doug has been active for 8 years and been around the world. In 2008, he was stationed on board USS RONALD REAGAN and the strike group had deployed to aid in OEF/OIF.
Report a Problem

Douglas Bauman
Class of 2001
Navy, 6 Years
I left Greenville 2 weeks after graduation for boot camp. I am currently an IC2 on board USS Russell (DDG 59). I've been on two ships now in support of OI/EF
Report a Problem

Eric Steele
Class of 1993
Navy, 15 Years
A Naval Submariner for 15 years and still going strong. Currrently a Chief and stationed in Kings Bay, GA. Spent 10 years in Hawaii and the last 5 scattered all over the East Coast. Go NAVY!
Report a Problem

Eric Steele
Class of 1993
Navy, 18 Years
Still serving in the Navy and intend on staying till my 30 year mark. In the submarine service and wouldn't change a thing about my life one bit. Thanks to all the supporters out there.
Report a Problem

James M. Edlund
Class of 2005
Army, 1 Years
Just completed his first year and is being stationed in Georgia. Hes a 25B- information systems operator-analyst.
Report a Problem

Jason Bluhm
Class of 1992
Navy, 15 Years
Enlisted right after graduation. Spent the next 5 years on the USS John Hancock DD 981 in Mayport Florida. Went to shore duty in New Jersey for a year then back to florida on the USS Boone FFG 28 for 4 years. Currently a Chief (E-7) in Tenn
Report a Problem

Jeremaih Gunderson
Class of 1995
Army, 5 Years
Staff Stg - Medic - I have served 2 tours of duty in Iraq and am preparing to go for my 3rd.
Report a Problem
12 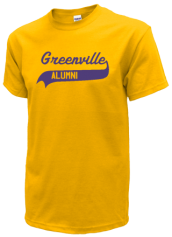 Read and submit stories about our classmates from Greenville High School, post achievements and news about our alumni, and post photos of our fellow Yellow Jackets.

Hunt for a Cure is planning the 1st Annual Alumni Basketball Game on Saturday, December 17 at GHS. We are inviting all G...
Read More »

View More or Post
In Memory Of
Our Greenville High School military alumni are some of the most outstanding people we know and this page recognizes them and everything they have done! Not everyone gets to come home for the holidays and we want our Greenville High School Military to know that they are loved and appreciated. All of us in Greenville are proud of our military alumni and want to thank them for risking their lives to protect our country!